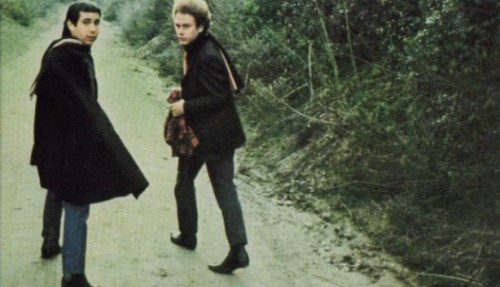 Boy, was he right.

“The Sound of Silence” not only made it to number one, it reunited Simon and Garfunkel, who hadn’t even known of the new version’s existence until it made the charts. Its dark, angst-ridden lyrics and its simple, resounding melody struck a major chord with its listeners; this is a song that brought a lot of people together, not least the ones who first sang it. Nearly half a century on, it’s stayed with all who heard it, in the way only a very few songs do, and continues to echo in many, many wells.

With a song as well established as “Silence,” it’s easier for a covering artist to put his/her/their own stamp on it. None of the following five versions could be considered folk-rock; all of them entwine themselves with their listeners as well as the original ever did.

The Abbasi Brothers – The Sound of Silence (Simon and Garfunkel cover)

The Abbasi Brothers’ instrumental rendition of “Silence” comes from Sing Me to Sleep, a collection of indie lullabies. It has more atmosphere than a Val Lewton movie, somehow putting the listener in the song’s setting while providing none of the song’s context.

Carmen McRae – The Sound of Silence (Simon and Garfunkel cover)

Carmen McRae, one of the most influential jazz vocalists of the 20th century, uses her patented behind-the-beat approach to good effect on her “Silence” cover. She also leaves out one word, which really hits home once the listener realizes the word’s been left out.

Model M – The Sound of Silence (Simon and Garfunkel cover)

Named after the legendary IBM keyboard – well, it’s legendary in some circles – Model M sounds like a German Crash Test Dummies (not a knock, just an observation). It’s got the doom-laden strings and electronica loops down cold, and we do mean cold.

Bobaflex – The Sound of Silence (Simon and Garfunkel cover)

You might expect a nu-metal cover of “Sounds of Silence” could be found somewhere, but you might not expect it to be handled with such care as Bobaflex gives it. They pay just as much attention to the quiet as the loud, and the parts where Simon and Garfunkel’s vocals descend is where Bobaflex’s take off – it’s an exhilarating effect.

Derek Webb comes from the Christian music field; his approach is a tremendous departure from the conventional style of the genre. Witness the “Silence” cover he made with his wife, singer/songwriter Sandra McCracken; it sounds as experimental and reactionary as you can imagine, reworking the song so that the narrator is pacing in circles, lost within a loop of his own making.

Sounds of Silence, the album with the remade hit version of “The Sound of Silence,” is on iTunes and Amazon.