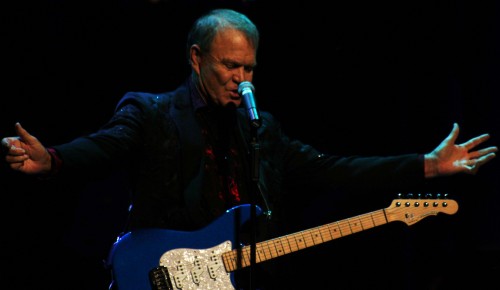 At this writing, Glen Campbell is taking his Farewell Tour. This is not one of those concert tours by a celebrity announcing retirement yet again; rather, it’s Campbell taking a valedictory lap around the country before the ravages of Alzheimer’s disease rob him entirely of his gifts. Reviews of these shows note the occasional stumbles, but also make mention of the standing ovations, Campbell’s still-unerring guitar work, and the fact that this is a man who doesn’t need to make new fans – he needs to say good-bye in style, and he’s doing exactly that.

Campbell’s place in music history has been secure for well over four decades – member of the Wrecking Crew, touring Beach Boy, countrypolitan virtuoso, etc., etc.. Even if he sang nothing but Jimmy Webb songs (“Wichita Lineman,” “By the Time I Get to Phoenix,” “Galveston”), he’d have earned his spot in the firmament a long time ago. Fortunately, he lent his talents to the work of a lot of songwriters, and we’re all thankful for the results. Here are some of them.

Tim Hardin’s “Reason to Believe” has seen more than its share of covers, and no wonder; it’s such a quality song that when Rod Stewart recorded his version, the record company made it the first single, shunting to the B-side a little ditty called “Maggie May.” But it’s Campbell’s version that allmusic.com called the prettiest version ever done – no small praise, and as you can hear, not in the least misguided.

Covering a Roy Orbison song and making the vocal the focal point would seem to be a fool’s errand, but Campbell repeatedly proved himself unafraid to open up his heart and let the fool rush in – he made quality covers of “Crying,” “It’s Over,” and “Running Scared,” featured here. Like Orbison, Campbell leaves the happy ending in peril until the final few words; like Orbison, he has us hanging on to all the preceding words for dear life.

Paul McCartney called the Beach Boys’ “God Only Knows” his all-time favorite song, and he certainly isn’t alone in holding it in such high regard. Campbell may not do it better, but he does it a little slower and a little bigger, and infuses the song with a different kind of strength, one that might even leave Brian Wilson himself humbled and grateful to hear his song receive such treatment.

These days, “These Days” may be best known as the song that accompanies Gwyneth Paltrow stepping off the bus in The Royal Tenenbaums. Nico’s was the first of the song’s many, many covers; its appearance on 2008’s Meet Glen Campbell was yet another indication of its staying power. It’s also something special when sung by a man in his twilight years; Campbell knows that, doesn’t oversell the song, and makes it all the better.

When Guided by Voices released Do the Collapse, they were bashed by critics who said they were selling out in hopes of the big hit they’d never have; the ballad “Hold On Hope” came under the heaviest attack and was later renounced by lead Voice Robert Pollard himself. But when Campbell covered it, on 2011’s Ghost on the Canvas, the lyrics not only mattered, they resonated. “Everybody’s got a hold on hope,” Campbell sings. “It’s the last thing that’s holding me.” Think of where he was when he sang that, knowing he was fated to do his own collapse, and you just might experience the feeling of someone walking over your own grave.

Find out more about Glen Campbell on his website.

5 Responses to “In the Spotlight: Glen Campbell”