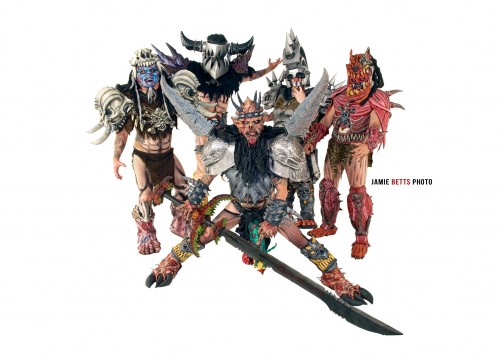 The AV Club in Chicago admits to catching flack every now and then for only featuring “small indie bands.”  These small indie bands usually have a fun time in the AV Sessions (we just saw Calexico do Kenny Loggins’ “Danger Zone“) but no one will ever be able to top alt-metal monsters GWAR and their take on Kansas’ “Carry On My Wayward Son.”

For those unfamiliar with how A.V. Undercover works, here is a quick rundown: 25 songs are selected to be covered and the earlier a band comes in during this 25 session run, the more songs they get to choose from. GWAR was last on the list, and it couldn’t be more apparent that they were simply stuck with this song. Frontman Oderus Urungus did not hide his distaste for the 1970s anthem and played it up even further during the actual performance, adding in impromptu lyrics about his unemployed “Wayward Son” needing to get his ass off the couch to find a job. Paired with GWAR’s signature heavy riffs and monster costumes, this is easily one of the most entertaining covers the Little Round Room has ever seen.

If you want to see one of GWAR’s performances that involve a little more fake blood and possible dismemberment of a fake Paris Hilton, go to their official website and see when they are coming to a venue near you.