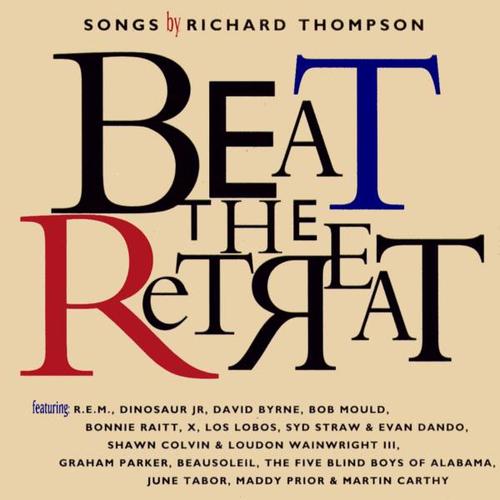 Richard Thompson is an ideal subject for a tribute album. He’s been acknowledged as the most underrated guitarist in rock for so long he’s in danger of losing the title. His songwriting is inspired, both musically and lyrically. If his singing voice is by default the weak leg in the tripod, that only means a band can put their own stamp on it with greater ease. To top it off, his cult audience would guarantee small but significant sales to people who knew music and who would be more open to a wide range of approaches to Thompson’s songs. 1994’s Beat the Retreat: Songs by Richard Thompson is a gathering of some of Thompson’s best work, performed by disparate artists with devoted followers of their own, bringing all their contrasting styles to salute one man – as such, for all its flaws, it has become an archetypal tribute album.

Add the blues of Bonnie Raitt, the gospel of the Five Blind Boys of Alabama, and the zydeco of Beausoliel, among other sounds, and you wind up with a mixed bag; some songs that were called high points by one critic were just as likely to be called low points by another. The patchwork approach may have made for a less smooth flow, but far more importantly, it served to prove that the best of Thompson’s songs could don any musical wardrobe and wind up with a perfect fit.

X was so much more than the punk band they got pigeonholed as – they blasted roots music and wailed poems over it, and in the process helped to change the way punk music and independent bands were perceived and marketed. Beat the Retreat caught them between hiatuses, and this serves to help their cover of “Shoot Out the Lights”; Exene Cervenka and John Doe’s voices are suffused with weariness as much as dread, and the song’s feeling of forboding can’t be shed or fled from – only gunned down.

Bob Mould (who also does a killer “Shoot Out the Lights”) borrows the X rhythm section of Doe and DJ Bonebrake to form a power trio that, for the length of their “Turning of the Tide” cover, prove themselves on a par with Husker Du and Sugar. Vocally, Mould sounds a lot like Thompson here; musically, he sounds like he’s out to burn down a wicker man in Thompson’s honor.

Thompson’s “I Misunderstood” is the story of man who doesn’t realize that the girl he loves is letting him down easy. There is nothing easy whatsoever about J Mascis’s cover; his slabs of guitar and drums (not to mention Mike Watt’s bass) reconstruct the song. In his hands, it’s like a house made of monoliths from the movie 2001, ready to impart their wisdom even as they overwhelm you.

By contrast, Los Lobos traverses the musical landscape of “Down Where the Drunkards Roll” with a steady grace that invites you along on a tour through the back alleys of the resigned and the regretful who still have it in themselves to claim greatness and believe in the greatness of others.

Released in the same year that saw them put out their loud, muddy rock album Monster, R.E.M.’s cover of “Wall of Death” feels closer to their hearts than anything off their own record. It’s lighter, freer, and still shows the complexities offered in Thompson’s lyric; compared to Monster, it really is the nearest to being alive.

Beat the Retreat is helping to keep Richard Thompson’s cult status in America alive by only being available on CD.