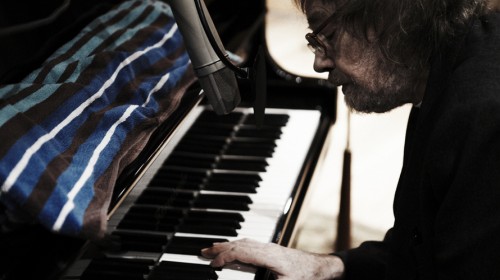 It’s a good narrative, and it’s mostly true. One group, though, never forgot Fay. Like-minded musicians twenty years his junior carried the torch throughout his absence with covers and shout-outs. Jeff Tweedy and Wilco led the pack, covering “Be Not so Fearful” in concert regularly over the years, even once dragging the reclusive Fay himself onstage. Pavement’s Stephen Malkmus titled a song “Bill Fay” (though he later changed it to “Share the Red”).

Thanks in part to his continued champions, Fay returns today with his first album in 30 years (not the widely-reported 40, as he clarified to SPIN). The recognition and acclaim that eluded him in his prime arrived in full force, with cultural institutions like NPR Weekend Edition and The Guardian hailing his return like a long-lost icon.

To celebrate Fay’s return, we put together a set of covers from those folks who championed Fay in the dark years leading up to his surprising second wind.

MP3: Wilco – Be Not So Fearful (Bill Fay cover)
Wilco has long covered this Fay gem in concert, and on new album Life Is People Fay returns the favor with a cover of their “Jesus Etc” (listen here).

MP3: Jim O’Rourke – Pictures of Adolf Again (Bill Fay cover)
Having covered both the Spice Girls and Burt Bacharach (a full album’s worth), Jim O’Rourke finds his covers all over the map. For a similar left-of-center experimenter though, Bill Fay may be more a kindred soul that most.