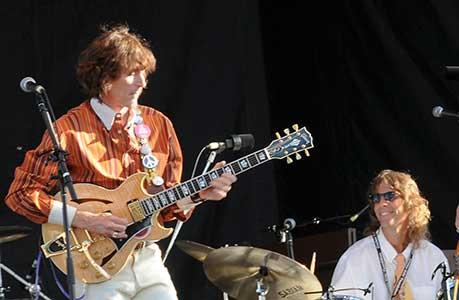 A good ’60s cover act has two duties: 1) come up with a creative, memorable name to help them stand out among their peers, and 2) play the songs that everybody knows. The Strolling Scones handle the first part with an enviable nonchalance – how could anybody forget that name? But when it comes to the second part, they go in another direction entirely.

The Scones write more than their fair share of originals, but their covers truly make them stand out, as much for their scope as their quality. They’re far more inclined to cover lesser-known classics – for example, their Cream cover isn’t “Sunshine of Your Love” or “White Room,” but “SWLABR.” Their obligatory Beatles cover is the far-less-obligatory “I Am the Walrus.” Even their cult-band covers aren’t the expected choices, as we shall see…

“Walk Away Renee” is the Left Banke’s signature hit, and “Pretty Ballerina” isn’t far behind, but the song the Strolling Scones cover is “She May Call You Up Tonight.” You’ll be left wondering why classic-oldies radio hasn’t latched onto that one as well, once you hear this near note-perfect cover.

Emitt Rhodes is one of those figures in music history whose name is spoken in near-whispers by a worshipful too-few. “You’re a Very Lovely Woman,” which Rhodes wrote while still in his teens and first recorded with the Merry-Go-Round, is a pioneer in baroque pop, and the Scones truly do it justice.

Strolling Scones – May This Be Love (Jimi Hendrix Experience cover)

From baroque pop to acid rock is quite a leap, but the Scones make it with ease in covering Jimi Hendrix. No “Purple Haze” for them, of course – rather, we’re reminded of the beauty Hendrix invested into “May This Be Love,” and we’re left wondering why we have to be reminded of music this beautiful.

Strolling Scones – A House Is Not A Motel (Love cover)

Two score and five years after its release, Love’s Forever Changes remains a classic that might be forgotten if it weren’t for rock critics rating it sky-high, thus introducing it to future rock critics. “Alone Again Or” is the usual go-to cover from the album; once again, the Scones defy expectations by covering the equally remarkable song that follows it. “A House Is Not a Motel” is defiantly lost in its own surreality, both in the original and the Scones’ worthy cover.

Moby Grape’s homonymous debut album is a psychedelic masterpiece that might have gained more notice if ten of its thirteen songs weren’t released on singles at the same time (Robert Christgau quite rightly called it “ineptly overhyped by a label that still doesn’t know what to do with it”). One of those A-sides was “8:05,” which brought pleasure and pain together in an acoustic setting that only amplifies the anguish of the lyrics. Once again, the Scones nail it, the notes of warmth and resignation resonating equally strong.

For more about the Strolling Scones, including their upcoming album, check out their website.

3 Responses to “Under the Radar: Strolling Scones”