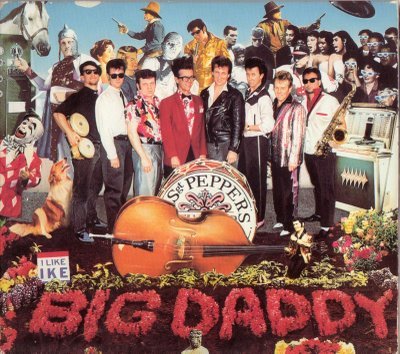 In 1992, the Beatles’ Sgt. Pepper’s Lonely Hearts Club Band was celebrating its silver anniversary. Some claimed the silver had tarnished, that Pepper wasn’t even in the top-five of Beatles albums (but don’t tell Rolling Stone that); however, this was overlooked for the sake of celebration, as musician after musician paid tribute to Messers L, M, H & S. But the greatest tribute may have come from a California novelty act that airbrushed a few thousand more gray hairs into the picture and came up with an album that’s just as fun, just as memorable, and – at the very end – just as emotionally overwhelming.

Big Daddy specialized in taking songs of the day and arranging them in a way that they might be performed by a band stuck in the ’50s. They concocted an elaborate backstory – while entertaining the troops in Vietnam, they had been kidnapped by guerillas, and when they were finally rescued, they were given sheet music of the day’s hits and played them the only way they knew. It was a one-joke premise, but you never knew how the punchline would sound next. Their last studio album, Sgt. Pepper’s, is arguably their peak.

Let’s start at the very beginning, where the band introduce themselves as doo-wop specialists before downshifting into “Poison Ivy”-era Coasters. The stage is set for the inevitable game of spot-the-influence, but the songs continue to reward long after the revelation – the “Who, me?” moment in the opening track is guaranteed to raise a smile.

Do Big Daddy top the Beatles with their take on “With a Little Help From My Friends,” a la Johnny Mathis? It’s not for me to say (see what I did there?), but they successfully invoke Mathis’s spirit and add a new layer of affection to the song – different from Joe Cocker’s layer, but no less rich.

Big Daddy – Lucy in the Sky with Diamonds (The Beatles cover)

Jerry Lee Lewis was once asked what he thought of the Beatles; his reply – “Hell, if I want ‘em to know what I think of ‘em, I’ll tell ‘em myself” – disappointed everyone and no one at the same time. One suspects that if he was asked what he thought of Big Daddy, after hearing their Killeresque “Lucy,” he’d seek them out for the chance to say, “Son, you done real good.”

Big Daddy – Being for the Benefit of Mr. Kite! (The Beatles cover)

Here comes the circus of Mr Kite, and Big Daddy take the famous poster that inspired Lennon and transport it to its early-‘1960s equivalent – an amusement park, as immortalized by Chuck “Gong Show” Barris’s “Palisades Park.”

Big Daddy – A Day in the Life (The Beatles cover)

With the final track, Big Daddy take an unexpected turn from affectionate tribute into inspired genius – and just in time, as “A Day in the Life” is one of the most inspired moments of the Lennon-McCartney partnership. Where John and Paul welded two disparate songs together in a shower of brilliant sparks, Big Daddy do the same with one composer’s work, and in the last moments, the song becomes moving, chilling, and altogether astonishing. By the way, if you have the software to unmask the backmasked talk at the very end, we’d be most obliged.

Big Daddy are back! Read about their upcoming project here.