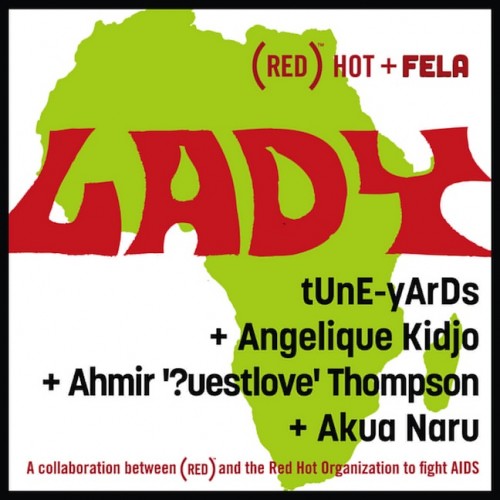 Beginning a 10-day fundraising effort called (RED) RUSH TO ZERO, experimental afro-beat pop artist tUnE-yArDs and The Roots’ ?uestlove have joined forces. Offering up a high energy cover of Fela Kuti’s “Lady” featuring rapper Akua Naru and African singer Angélique Kidjo, the track was recorded for an upcoming tribute called Red Hot + FELA. The album which is scheduled for release in the Fall will include songs paying tribute to Nigerian musician/singer and social activist Fela Kuti.

Although the original song represented Fela’s cultural views chiding women’s liberation in the traditional European sense, Merrill Garbus, a.k.a. tUnE-yArDs, told Billboard in a statement, “I wanted to reclaim “Lady” for women in the world today, particularly African women, who will have an important role in ending the AIDS epidemic there. I was so happy to have the powerful Angelique Kidjo pour her soul into it, and then rapper Akua Naru wrote a raw, intense verse that perfectly extended and completed our version of the song.”  The compilation is the first collaboration between AIDS charities (RED) and Red Hot Organization. Proceeds will benefit the charities’ fight against AIDS through popular culture figures and consumer products. The track is available to purchase through iTunes or stream it below.

For more information on the (RED)RUSH TO ZERO campaign visit the website.