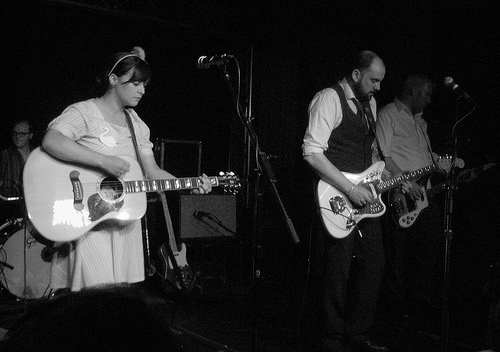 Camera Obscura have carved out a reputation as standard bearers of Scottish independent music, continuing the good work of the mighty Belle & Sebastian by flying the flag for Glaswegian culture since the late ‘90s. Renowned for their trademark tuneful indiepop, mixing lo-fi vocals and a dash of melancholy with retro flavours of ‘60s Motown and the occasional splash of country, it’s unsurprising that they are a goldmine for unexpectedly brilliant covers.

Camera Obscura – Super Trouper (ABBA cover)
In 2007, the band decided to include as a B-side a version of song written by an obscure group of Swedes collectively known by the bizarre moniker of “ABBA” – ever heard of them? Tracyanne Cambell’s vocals actually force you to give the lyrics a second thought, and apparently Abba were sad sometimes? With this slightly maudlin take on a camp classic, plus the passing reference to the band’s home city, the group really make this one their own.

Camera Obscura – I Love How You Love Me (The Paris Sisters cover)
Camera Obscura have always been ones for wearing their influences on their sleeve; for instance, “Lloyd, I’m Ready to Be Heartbroken” is a response to the song “Are You Ready to Be Heartbroken” by another Glasgow group, Lloyd Cole and the Commotions. But the musical legends of their home city – Lloyd Cole being one of many – are surely not the only source of inspiration for Camera Obscura. You can also feel the legacy of Phil Spector’s sugar sweet, girl-group pop. “I Love How You Love Me” was originally a hit for The Paris Sisters, who took Spector’s trademark “Wall of Sound” to the top of the charts in 1961. The 2007 cover version marks out exactly how much the group owe to old Phil.

Camera Obscura – Modern Girl (Sheena Easton cover)
Proving once again that they really are ’80s fans, Camera Obscura’s take on this Sheena Easton number brings out the melancholy core of what appears to be a piece of straight-up pop. Life is tough for the modern lady. But she’s doing her best. This version takes the tempo right down to a country shuffle, with some slide guitar to boot.

Camera Obscura – Ae Fond Kiss (Robert Burns cover)
This version of the classic Scottish folk song, performed for one of John Peel’s annual Burns Night celebrations, completely reverses the traditional melancholy setting of the Robert Burns poem with its bouncy melody, which in turns makes you think that perhaps Burns is being a little over-dramatic about this tragic love story – cheer up lad, plenty more fish in the sea and all that… You will never have a national holiday named after you if you sit around sulking all day! (Two other Burns poems follow.)

Find out more about Camera Obscura on their official site, and see what they have to offer on iTunes and Amazon.