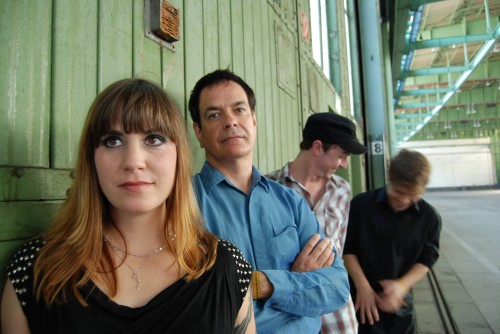 The Wedding Present may not be a familiar name in the United States, but in the UK and elsewhere, they need no introduction – they’re the band that took over the “Most Successful Indie Band” label from the Smiths and haven’t recognized any relinquishing since. Led by David Gedge, they have been a feral presence for over a quarter century, and they show no signs of slowing down. Gedge is the only constant, and the band has reflected his evolving from a triple-time songster to a man that still knows how to express being screwed over at half speed. As one YouTube commenter wrote, “If they had told me heaven sounded like this, I would have joined﻿ the priesthood.”

The Wedding Present have a long history of cover songs: we’re proud to present a few of them here…

The Wedding Present – Getting Better (The Beatles cover)

On Sgt. Pepper’s Lonely Heart’s Club Band, “Getting Better” passes the time pleasantly enough, reflecting the optimism of 1967 even as it admits to its dark parts (thanks to John’s “I used to be cruel to my woman” contribution). On Sgt. Pepper Knew My Father, a 1988 tribute album that covered the original track for track, the Wedding Present take the original and put fifty thousand watts of power behind it. Suddenly the Beatles’ version (sampled several times within) seems pokey, as Gedge (with help from Amelia Fletcher) attacks the words and lets the band floor it behind him. This is one reimagined Beatles cover that thrills in a way the original never could.

Likewise, “It’s Not Unusual” sounds nothing like what Tom Jones could possibly be capable of delivering. Gedge’s vocals are almost lost in the mix, but his resignation at the fact that “it happens all the time” comes through as furor in the Wedding Present’s version, and the sheer blast of vehemence in the music makes it a song no longer suitable for Las Vegas.

In 1992, the Wedding Present released a single a month; each single had a cover for the B side, and each single made the top thirty, which put the band in the Guinness Book of World Records for having a dozen chart hits in one year, something only Elvis Presley had done before them. The covers ranged from the theme to Shaft to the theme from Twin Peaks. One of these covers was “Pleasant Valley Sunday”; where the Monkees focused on the irony of the song, Gedge & Co. were all about the injustice.

The Wedding Present – Caroline, No (The Beach Boys cover)

There’s no feedback in the Beach Boys’ glorious rendition of “Caroline, No,” their closing track on Pet Sounds. That’s one of the (surprisingly) few differences between their version and the Wedding Present’s. No matter the decade, no matter the style, it’s always so sad to watch a sweet thing die. (It’s hard not to miss the passing train and the barks of Banana & Louie, though.)

If you get a random free moment, you should look up the complete lyrics to the theme song from the classic TV show Cheers. There are words in the verses that never made it to the original broadcasts, like “your third fiance didn’t show” and “your husband wants to be a girl.” But of course, nobody considers that; we all want to focus on that irresistible chorus, the comfort of being welcomed by everyone, whether they know you or not. Again, the lyrics are nearly lost in the Weddoes’ cacophony, but our familiarity with the source carries the day.

Here’s the official home of the Wedding Present: for more, go to iTunes and Amazon. On a purely personal note, I love all 9:14 of “Take Me!”