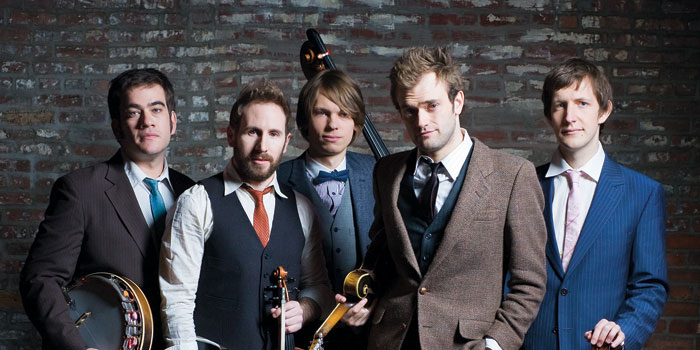 Bluegrass mavericks Punch Brothers have been known to cover artists as diverse as The Strokes, D’Angelo, Josh Ritter and Radiohead during their live shows, so it seems logical for them to participate in the latest edition of A.V. Club’s Undercover video series, which recruits touring musical acts to cover a song selected from their occasionally quirky master list. While this format has birthed some rather silly pairings in the past, including They Might Be Giants’ raucous version of the seminal “Tubthumping” by Chumbawumba, Chris Thile and co. show impressive cross-genre dexterity with their irony-free version of The Cars‘ classic “Just What I Needed.”

The enthusiasm that Punch Brothers bring to this cover make the song sound natural and true to the spirit of the original, as they do their best to adapt the melodies of The Cars’ version to their non-rock instrumentation rather than completely re-interpret the entire composition. Thile focuses mainly on his lead vocal duties, using his mandolin for percussion rather than virtuosic solos. Fiddle player Gabe Wincher and banjo master Noam Pickelny take the spotlight instead, playing the lead melodies and engaging in some playful one-upmanship at the end. Guitarist Chris Eldidge and bass phenom Paul Kowert stay largely in the background, forming a de facto rock-style rhythm section. With this instrumental formula, their arrangement manages to preserve essentially every key aspect of the original song, adapting the guitar solo to fiddle and the iconic synth line to Noam’s rapid three-finger banjo picking, as pioneered by the late Earl Scruggs. The impressive adaptation and Thile’s charismatic singing make this cover of the best that A.V. Undercover’s formula has produced so far. Watch the video (and, unfortunately, a short Starbucks ad) below.

One Response to “Watch: Punch Brothers Bluegrass Up The Cars’ “Just What I Needed””