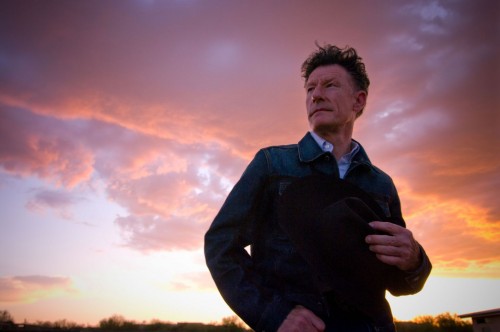 When Lyle Lovett first arrived, the country music scene was proud to call the tall Texan one of their own. As his career developed, though, the top-twenty hits dried up, and the establishment took a wary step back. Lovett’s songs may have had a southern feel, but they were also infused with folk, jazz, blues, and big band (make that “large band”), and there was nothing formulaic about his lyrics, which never met a cliche they couldn’t leave sprawling in the dirt.

Fortunately, while Lovett’s C&W fortunes may have declined, other audiences became aware of him, and his smart singing/songwriting and blazing live shows have made him a favorite for over a quarter century. Part of the credit to his success can also go to his ability with interpreting the songs of others. Lovett’s been generous with crediting those who came before him, and when he covers their songs, he does it with real empathy, both toward the songwriter and the song. Listen to these five examples.

Lovett’s cover of “Stand By Your Man” caused considerable consternation when it first appeared on 1989’s Lyle Lovett and his Large Band. Was it tongue-in-cheek or did he mean it? Could a man sing that song without it being some kind of rebuke? Lovett refused to pretend he had the answers; all he could do was stand by the song and show the world he loved it, with a truly impassioned performance.

Deadicated was a 1991 tribute to the Grateful Dead that aimed to show the Dead were more than just loose jammers, and for the most part it succeeds. Lovett’s contribution was a cover of “Friend of the Devil,” which turns the merry shuffle of the original into a restrained mosey – Jerry Garcia sets out running, but Lyle takes his time, sounding more and more reluctant to come to any kind of conclusion.

Lyle Lovett – If I Needed You (Townes Van Zandt cover)

1998’s Step Inside This House was an all-cover album, where Lovett paid tribute to other Texan songwriters who’d influenced his writing. One of these was the late, great Townes Van Zandt; his song “If I Needed You,” which came to him in a dream, proves an excellent fit for Lovett’s aching delivery.

“Christmastime Is Here” would be regarded as one of the most melancholy Yuletide carols ever even if it had nothing to do with Charlie Brown. The words are pleasant enough, but it’s impossible to get past that despondent melody. Lovett, joined here by Kat Edmonson, is at least able to get a sense of warmth in the song with his acoustic, so that you can hear it without needing to spike your eggnog any further.

Release Me, Lovett’s newest album, is his final one for the Curb label, but this collection of swan songs (all but two of them covers) isn’t the contractually obligated kiss-off it could have been. Instead, it’s one more chance for Lovett to show favor to those who wore his path to the dust that lightly settles on his boots. One of them turns out to be Chuck Berry; Lovett turns Berry’s “Brown Eyed Handsome Man” into the laid-back tale of a man who may not get to his destination as fast as his predecessor, but who’s no less certain that his reward will be waiting for him the moment he arrives.

Lovett’s music is on iTunes and Amazon; he’s got great videos, some tour dates, and more on his website.

2 Responses to “In the Spotlight: Lyle Lovett”