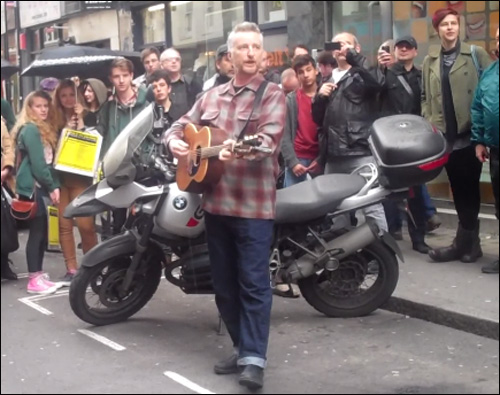 British punk/folk rocker Billy Bragg has spent the last three decades embracing grassroots action, protests and politics. Upon quitting the British Army after 3 months in 1981, Bragg began busking with his music and supporting movements to reform the British political system. Bragg is a tireless activist, believing that his work to make a difference starts when he puts the guitar down and becomes more than a protest singer.

So, it is more than fitting to see Billy Bragg honor Record Store Day 2012 by busking outside the Sister Ray record store on Berwick Street in London. He took to the streets dodging cars and trucks, pedestrians and a bit of rain. Taking on Bob Dylan’s “Don’t Think Twice, It’s All Right”, Bragg begins to build a small gathering on the street. By the time he gets to the next song, the crowd is big enough that Bragg asks them to sing along to one of his favorites, Elvis Presley’s “Can’t Help Falling In Love”. He also happened to make a bit of money off of it as one of the first songs he would busk with. Check out Billy Bragg blocking traffic below.

Get more info on Billy Bragg on his website.