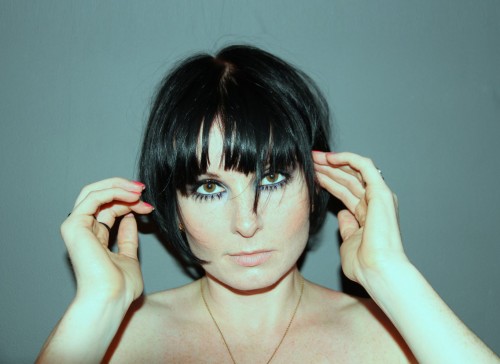 English musician Becky Jones, known on stage as Saint Saviour, has an eclectic website. It looks almost like a tumblr, and actually overlaps with her personal blog; there’s a black and white portrait of Ian Curtis, photographs admiring architecture, items she’s received in the mail, and several art pieces she likes, all of which reflect her large personality. And of course, there’s promotional material for her music, including the most recently published cover of Siouxsie and the Banshees‘ “Happy House.”

Saint Saviour is well acquainted with electronic music, so it’s befitting that she chose to cover “Happy House,” released on the Banshees’ 1980 album Kaleidoscope. During that time in the Banshees’ career, the band was dealing with changes in the line-up, which in turn brought experimental sounds to the record. Having introduced a synthesizer, the band played with an electronic sound unique to their previous albums. Saint Saviour’s version of “Happy House” is fairly true to the original; save for some additional spoken word pieces that gives it a more club feel than Siouxsie’s version, the track keeps that somewhat cynical tone, but makes it slightly more like an electro-dance track, instead of a post-punk gothic dance track. Listen below.

Listen to more Saint Saviour at her Myspace.