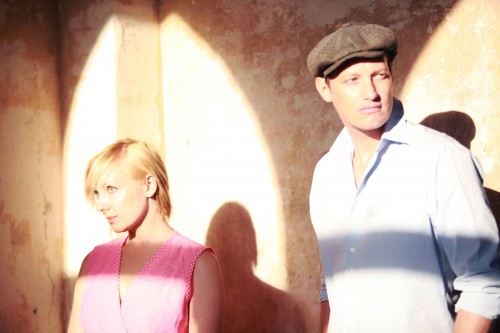 • Last month, the Rosebuds covered the Talking Heads. The choice was a natural – both groups deliver poppy, off-kilter melodies that worm into your head for days. Salt-n-Pepa, on the other hand, haven’t influenced Ivan and Kelly Rosebud one iota. They just re-released it for free on their new Bandcamp.
MP3: The Rosebuds – Push It (Salt-n-Pepa cover)

• Harry Nilsson songs never lack for covers, but Brass Bed and Allison Bohl’s new On Nilsson EP shows they know how to do it right. The keyboard-haze on “One” makes it that much more lonesome. (via My Old Kentucky Blog)
MP3: Brass Bed with Allison Bohl – One (Harry Nilsson cover)

• The Vietnam war documentary sample that starts out this electropop gem indicates straight off this won’t be a typical Neil Young cover. The band may be named Gitar, but Snyh and Drm Pad might be more accurate.
MP3: Gitar – Hippie Dream (Neil Young cover)

• overlord released their brilliantly-titled album In Soviet Russian, My Heart Breaks For You to some college radio buzz last year and just sent over a pair of follow-up covers. Their lo-fi Smiths churn draws elements of chillwave and doowop alike, but the Del Shannon b-side draws out their more poppy, melodic side.
MP3: overlord – Reel Around the Fountain (The Smiths cover)
MP3: overlord – Kelly (Del Shannon cover)