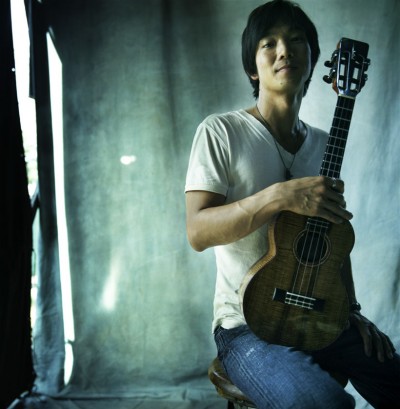 Few musicians (if any) have re-defined the technique of their instrument the way Jake Shimabukuro has with his revolutionary ukulele arrangements. He introduced himself to the world when his technically-ambitious reworking of The Beatles’ “While My Guitar Gently Weeps” hit YouTube in 2006, and he has continued to release a steady stream of equally impressive covers and originals since. Inspired by Adele‘s Grammy sweep, Jake recently brought his unique style to her massive single “Rolling In The Deep,” which he performed recently in an exclusive for Perez Hilton’s website.

As we’ve come to expect from the Hawaiian virtuoso, his instrumental take on “Rolling In The Deep” captures both the melody lines note-for-note and the unrestrained emotion of Adele’s original performance. Jake incorporates precise finger-picking and passionate, intense strumming into his performance, alternately wailing on and gently cradling his gorgeous tenor uke. In certain sections he surrenders his whole body to the song’s rhythms, pounding his foot on the floor, nodding his head and waving his torso. Expect this tune to find its way into Jake’s tremendous live sets immediately, if not sooner. [via Perez TV]