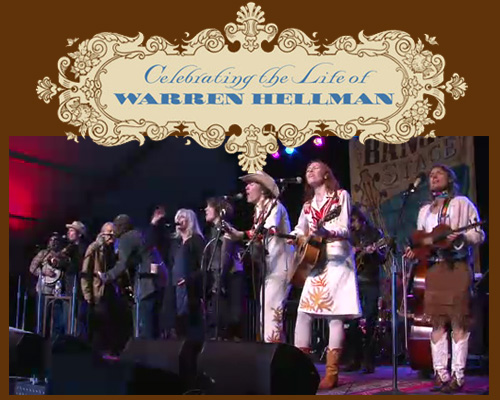 The sun was out all day on Sunday as thousands of music fans gathered at Ocean Beach on San Francisco’s Great Highway to pay tribute to Hardly Strictly Bluegrass festival founder and local financier Warren Hellman. Hellman, who died Dec. 18 at age 77 after a long battle with leukemia, was an avid banjo player who gave the gift of the free, three-day music festival to millions over the last decade.

During local Bay Area rock legend Boz Scaggs’ set he did a heartfelt rendition of Bob Dylan’s “Boots of Spanish Leather” on acoustic guitar. Emmylou Harris invited Gillian Welch and David Rawlings out for a cover of Rosa Watson’s “Your Long Journey.” For the memorial finale, Emmylou invited all the performers back for “The new anthem of our generation for group sing, by one of the greatest bands ever, The Band” as the crowd joined in for “The Weight”.