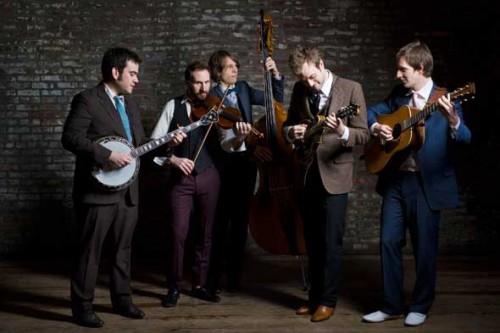 Punch Brothers, one of the predominant groups of the recent “newgrass” acoustic revival, have always had a penchant for cross-genre experimentation, incorporating jazz song forms, Bach sonatas and rock covers into their live sets and albums. For their brand-new album Who’s Feeling Young Now?, Chris Thile, Noam Pickelny and company have finally decided to record their cover of Radiohead‘s electronic masterpiece “Kid A,” which has been the closing song of their live set since 2009. On stage they usually transition from “Kid A” into their cover of Gillian Welch’s much more traditional and upbeat “Wayside/Back In Time,” contrasting the two styles, but on the album it appears on its own, proving its worth as more than a live novelty.

Most obviously, the instrumentation makes this cover vastly different from the original. Chris Thile handles much of the percussion by strumming his muted mandolin strings, which produces a chunky snare-esque effect. Especially in the intro, the wailing atmospheric elements come from Gabe Witcher’s fiddle, and Pikelny’s banjo plucking forms the repetitive melody. The double bass and acoustic guitar play the deep, booming chord progression that rounds out the composition. Bassist Paul Kowert also breaks out a bow in the closing sections to recreate the vocal melodies from the original. This song is absolutely mind-blowing live, as the Punch Bros. somehow match Radiohead’s mechanical precision before the audience’s eyes, and this album recording similarly demonstrates their almost unbelievable virtuosity. Stream the track below, and you can also check out both Punch Brothers and Radiohead at Bonnaroo this June.