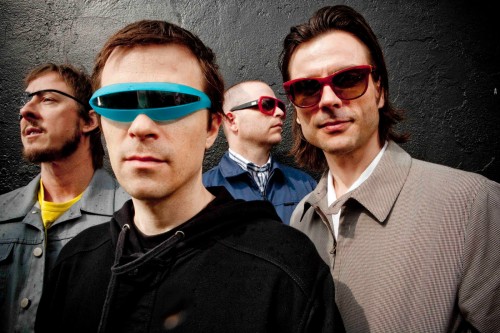 The members of Weezer, and a mass of super fans, recently returned from Weezer Cruise 2012. Yes, a very real, very sincere, and very weird cruise. No irony. After partnering up with Carnival Cruise Lines, Weezer set sail from Miami to Cozumel, January 19-23. The typical cruise amenities were provided, but Weezer boasted unique events like Rivers reading from “The Pinkerton Diaries,” watching Young Frankenstein with Brian, and vow renewals with Scott. Perhaps the true highlight was the lineup of bands, which, along with Weezer, included Dinosaur Jr, Sebadoh, Wavves, the Knocks and many other acts.

There is most likely little to no middle ground with this. You’re either very relieved to not have been trapped on a ship with Weezer fans, or pretty broken up if you missed the Weezer wonderland. Fear not, latter half of the divide, for your fellow Weezer fans have already started to upload videos from the cruise. Among the videos is Weezer covering Black Francis/Frank Black’s “Los Angeles.” The quality is pretty low, but Patrick Wilson sings, and the band pulls off a pretty faithful rendition of the original. Watch the video below.