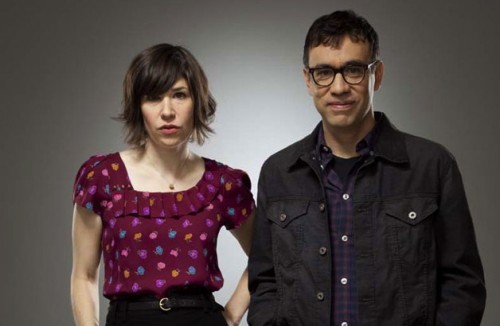 The second season of IFC’s sketch series Portlandia premiered earlier this month. For all the comedic acclaim stars Fred Armisen and Carrie Brownstein receive, they garner equal acclaim for their musicianship. We recently covered the duo playing “Push It” on their Portlandia tour, and now they have covered Devo’s “Beautiful World” during a Rolling Stone interview that turned into an informal session.

The song is already a familiar selection for Armisen, with Brownstein trying to learn as they go. Despite the way the performance teeters between part lesson, and part solo, it’s charming, and the conversation that leads them into playing “Beautiful World” is worth a listen. (via Rolling Stone)

One Response to “Watch: Fred Armisen and Carrie Brownstein of ‘Portlandia’ Cover Devo”