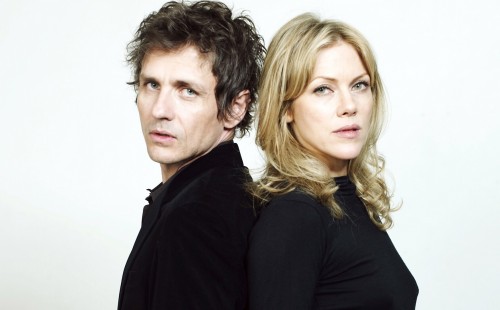 • Last year, ex-Luna bandmates Dean & Britta released 13 Most Beautiful…Songs For Andy Warhol’s Screen Tests. It featured songs inspired by the Factory scene and a cover of Nico’s “I’ll Keep It with Mine” (itself a Bob Dylan cover). Now there’s a slightly more fleshed-out remix circulating, drawing more attention to a beautiful disc that flew under the radar.
MP3: Dean & Britta – I’ll Keep It with Mine (Scott Hardkiss Remix) (Bob Dylan cover)

• Los Angeles “nu gaze” band Light FM spent much of the fall on tour with Smashing Pumpkins. When it wrapped up, they decided to thank Corgan and co. with a cover of “Disarm.” They also covered Grandaddy, because why record one churning electro-rock cover when you can do two?
MP3: Light FM – Disarm (The Smashing Pumpkins cover)
MP3: Light FM – AM 180 (Grandaddy cover)

• Doe Paoro just surfaced a few months ago, but given the few high-profile premieres she’s already had, we expect you might be hearing a lot more about her in 2012. On her new Future Islands cover – first heard at BrooklynVegan – she gives off an Oh Land vibe with a big voice and spacey electronics.
MP3: Doe Paoro – Little Dreamer (Future Islands cover)

• Courtney Love is nothing if not abrasive, so it seems appropriate that this Hole cover is too. The electro-industrial vibe might not be for everyone, but if spaced-out noise with buried melodies is your thing, Hard White will be right up your alley.
MP3: Hard White – Dying (Hole cover)

• Did the Bruce Hornsby vibe of Bon Iver’s divisive “Beth/Rest” turn you off? Perhaps this beautiful, cheese-free folk cover will get you back aboard. It comes from Dress Rehearsal’s new covers EP, which shows how much a beautiful voice can do with just a guitar. Hmm, sounds kind of like 2008-era Bon Iver.
MP3: Dress Rehearsal – Beth/Rest (Bon Iver cover)