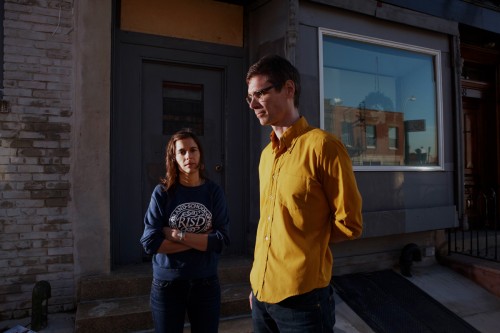 Chris Whitley was one of those artists his fellow musicians adored (Springsteen, Petty, and Richards among them) that never got the fame he deserved. He died of lung cancer in 2005, but Little Silver keep his legacy alive on a new cover. The husband and wife duo of Steve Curtis (of Hem) and Erika Simonian tackled Whitley’s “Dirt Floor.” The duo turn the track from a bluesy folk song into an intimate bedroom ballad and we’re pleased to premiere it below.

The hushed atmospherics and fragile beauty recall similar folk duos both new (the Civil Wars) and old (Richard and Linda Thompson). It’s the first cut available from their upcoming covers EP Dress-Up, which drops early next year. Curtis tells us how they chose the track:

Chris Whitley’s Dirt Floor came out in 1998 and has the undignified distinction of being the last album I absolutely wore out on cassette tape. Hem’s Dan Messe made a dub of it for me when I first moved to NYC, and I can very distinctly picture myself at points all over town with those songs serving as the running soundtrack in my headphones. Each track on the short album is strong enough to knock the unsuspecting clear over, and at various points through the years Erika and I have approached the songs with both caution and reverence with an ear to possibly covering one of them. The title track here is one that we eventually decided that felt we could hear ourselves in, and it then fell right together in this live take.