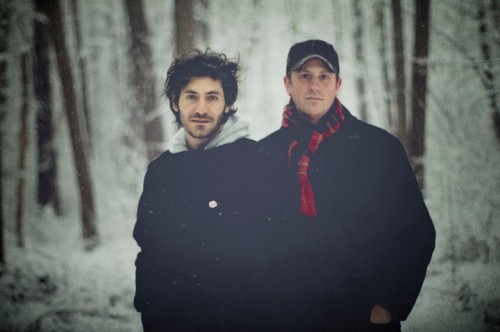 Indie-alternative artists Ryan Weber and Eric Osterman released their first record All Those I Know online on December 31st of last year, and have since then established a loyal online fan base under the stage name Eric & Magill. They offer a polished ambient sound that rings true with a lot of indie, electronic and alternative music lovers. This time around they have released another digital download for fans, to pay tribute to their listeners and the talented folks who helped make their first record happen.

Appropriately titled Kick the Covers Vol. 1, the EP consists of 5 songs originally performed by artists who collaborated with them on their first record. This includes covers of originals by The Snake The Cross The Crown, Noon Duet, Via Tania, Faux Fir, and Shearwater. Even if you aren’t familiar with the original artists, Eric & Magill’s EP has the same melancholic and exciting impact of their original work. The guys have also promised some more cover EPs to follow, using the first to thank friends and fellow musicians who have helped them along the way. Stream and download the EP below, and make sure to keep an eye out for the pair’s next digital release.

Check out more from Eric & Magill at their Website or Myspace.