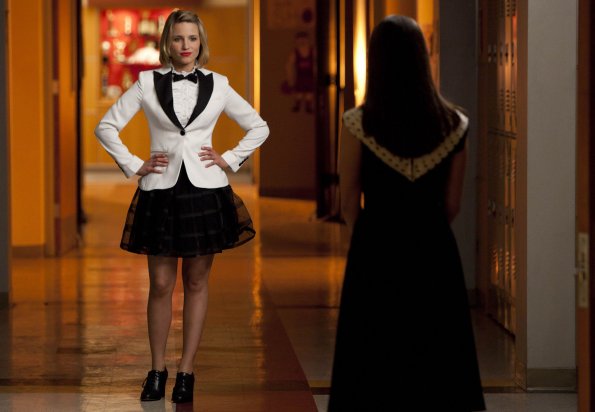 Just last week I was thinking about how, in the future, we’ll be able to look back and pinpoint lackluster Glee episodes with an alarming degree of certainty based solely on the presence of Sam Evans (Chord Overstreet), a character who appeared only in season two, which seems generally agreed-upon as the worst of Glee‘s output to date. It should be no surprise, then, that when Sam returns to the show this week he brings with him a very season two-styled episode that feels the need to rush through a whirlwind of plot points without really doing justice to any of them. Even though “Hold on to Sixteen” is one of those special “competition” episodes that brings plots to their culmination by design, everything about it feels so hurried that nothing really has a chance to land – it’s 20 minutes of plot, then 20 minutes of performances, then a tacked-on happy ending. Honestly, I did not enjoy it.

On the other hand, “Hold on to Sixteen” earns an adjective often foreign to Glee: subtle, at least as far as its music choices. Consider: this episode takes its name from the John Mellencamp song “Jack and Diane” (so says Sam), but no one bursts into one of his numbers here (that’s too bad; I think Finn would nail “Rain on the Scarecrow”). Even more so, the New Directions kids execute an entire Jackson-themed Sectionals set (Jackson 5, Janet and Michael) and no one says anything about it. If you don’t know the songs, someone would have to point this out for you. When has Glee ever showed that kind of restraint? My (perhaps long-shot) theory is that those songs, particularly the two featuring Michael, drive home this episode’s theme of trying to avoid the pains of growing up. Many would argue, after all, that Michael Jackson is no one if not a man who tragically refused to grow up at all costs. Do the presence of “ABC” and “Man in the Mirror” then serve to undercut this episode’s ostensible moral that we should all “hold on to sixteen” as long as we can? I don’t know. Maybe I’m giving the show far too much credit. What do you guys think?

Anyway, this being a performance episode, we’ve got a lot of music to cover, so let’s get to it!

Red Solo Cup (Toby Keith cover)
Sam announces his return to glee club with this… something. Popular country doesn’t get aired out all that much on Glee (and last week gave audiences the show’s first-ever classic country song), and I suppose the countless fans of that genre need something to watch, but I did not enjoy this. Chord sing-talks his way through the song, which I’m sure is correct, but I find it not at all appealing. Also, the lyrics are surprisingly inappropriate, even for this show (last time the gang sang about alcohol, it was in an anti-drinking episode). The one thing I enjoy about this performance is Kurt’s reaction in the video. He clearly has no idea what this song is and finds it impossible to sing along. Maybe he’s meant to be a surrogate for audience members like me. At any rate, pass.
BONUS: Here’s the most popular YouTube cover for this relatively new song. I like this kid’s sense of decor.

Buenos Aires (from Evita)
Lindsay from The Glee Project returns in the guise of Harmony, a New York-bound theater-obsessed rival for Rachel and Kurt introduced in this season’s first episode. While I didn’t really like her on Glee Project, this girl has some serious pipes. I quite enjoyed this energetic performance, and again I have to praise director Bradley Buecker for the choices he makes here, like having both Rachel and Kurt mouth the words to the song from the audience.
BONUS: In case you were wondering what Madonna did with this song.

I Will Survive/Survivor (Gloria Gainor/Destiny’s Child cover)
It’s hard to imagine the TroubleTones topping their mammoth Adele mash-up from two weeks ago. While this combo re: surviving (what, no “Eye of the Tiger”?) doesn’t surpass that performance, it’s really quite good. The arrangement here works very well, allowing the Destiny’s Child song to enter the mix organically yet unexpectedly (so much so that the audience in this episode goes absolutely crazy when they hear it, which I don’t buy at all). Santana’s (Naya Rivera) had a lot to do this season, and again she shines on co-lead. I don’t think this was the best we’ve gotten from Mercedes (Amber Riley), but she does a fine job, especially on the Destiny’s Child parts.
BONUS: I think I’ve got to link the Cake cover, right?

ABC (Jackson 5 cover)
This 1970 Jackson Five hit opens the New Directions’ Sectionals set. It’s fun and bouncy as required, but it doesn’t seem like it has the passion or oomph one might have expected. At least lead vocals get passed around, giving Tina (Jenna Ushkowitz) her first spotlight all season. Also, the vocal breakdown (here provided by Kurt and Mike) is fantastic. Another fun staging note: watch the woman in front of Mike’s dad who’s clapping along at the end of the performance. She does not seem entertained.
BONUS: We spotlighted all-girl a cappella group Cimorelli doing Lady Gaga’s “You and I” a few weeks ago; here’s their take on this song. Almost two million views on YouTube. Can you believe it?

Control (Janet Jackson cover)
New Directions’ all-Jackson set continues with this rendition of Janet’s 1986 “Control.” This one fares a little better than “ABC,” mostly due to its casting — leads are given to in my opinion the two best male vocalists on the show, Blaine (Darren Criss) and Artie (Kevin McHale) who shockingly hasn’t sung all season! Artie was my top vocalist last year, and I hope this signifies him getting back into the spotlight.
BONUS: Vitamin String Quartet turns in a haunting orchestral version of this dance classic.

Man in the Mirror (Michael Jackson cover)
All the New Directions guys get to take a crack at this 1988 Michael classic, their final Sectionals number. The key’s dropped a few steps to allow voices less angelic than Michael’s to have a crack, and it seems to suit everybody except Finn (Cory Monteith), who continues to be one of the least interesting male voices on the show. Artie kills it in his parts, which should be no surprise; he got to sing Michael tunes twice last year. Though I don’t think this performance is a Glee classic, it works pretty well; I did like Mr. Chang coming around to his son’s career choices being matched up with the lyrics “if you close your heart you close your mind.”
BONUS: British musician James Morrison delivers a beautiful acoustic rendition of this song.

We Are Young (fun. featuring Janelle Monae cover)
To close out the episode and signify the reunification of New Directions and the TroubleTones (did anyone not see this coming?), Glee covers a song so new it hasn’t actually been released on an album yet. “We Are Young,” from New York indie pop band fun., will drop on the album Some Nights in February 2012. Until then, you can catch the single on YouTube or enjoy the Glee version, which brings giant group vocals to match the new, bigger-than-ever New Directions. This was a fine performance, but ending a fairly stacked episode with a relatively unknown song seems a bit anticlimactic. How do you top the Jacksons?
BONUS: This song is so new, only a baby could cover it or something!