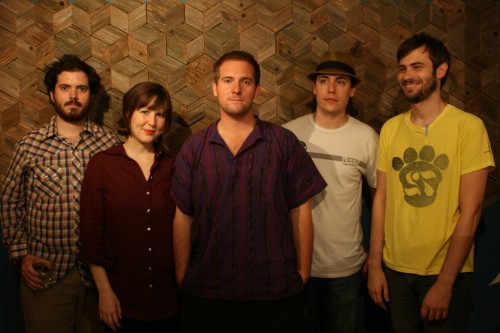 Back in the late ’90s, Swedish pop stars the Cardigans were all over the radio. All you heard all day was lead singer Nina Persson singing “love me, love me” everywhere you went. But can you blame the DJs (and VJs, because, yes, there was a time when MTV played music videos)? The song came from Romeo + Juliet starring Claire Danes and Leonardo DiCaprio! To all you young’uns, just imagine Twilight, but if it had guns and didn’t suck.

Austin quintet Black Books may not have released a debut album yet, but they started making music together back when “Lovefool” was inescapable. For that reason, they felt it would be an appropriate song to cover, and they have made a great update to a tired track. At first they stick close to the Cardigans’ version, excluding the fact that lead singer Ross Gilfillan is a dude and sounds a little drunk as he slurs through the verses. When they hit the chorus, though, things get a bit trippy. The band really hits on the best parts of the song; rather than being repetitive to the point of being grating, they shroud the words in mountains of reverb and distortion until they are soft enough to float on. Even though the second verse is just like the first, coming after that refrain it sounds completely new. Black Books have captured that nostalgia of the original and made it new. Download and hear the song again for the first time below. (Via Syffal)

Check out more from Black Books at their website and Bandcamp.