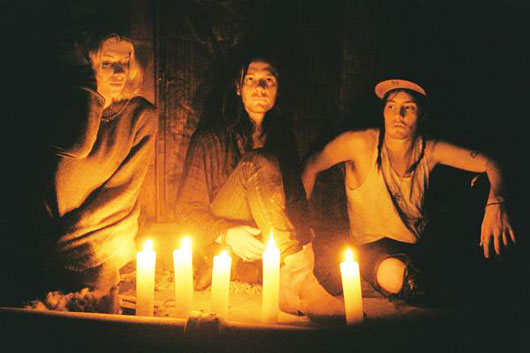 So-called “witch-house” group Salem are known for their absolutely terrifying brand of creepy electronic music with inhuman, ghoulish vocals and hints of southern crunk hip-hop, but recently they’ve turned from creating original songs to making dystopic remixes and covers of otherwise innocent pop hits, starting with Britney Spears’ “Til The World Ends” and now reaching back to 1998 for Alice Deejay’s classic “Better Off Alone” (yes, the one with the incessant “do you think you were better off alone?” hook).

Salem’s approach to the song preserves almost as little of the original as possible, burying the chord progression under layers of droning synths and frantic percussion, slowing down the famous riff and mangling the vocal hook with so many effects that you can just barely make out the words. The self-directed music video sheds more light on their intentions with the cover, as the song plays over a loop of supermodel Gisele Bündchen fighting her way through a seizure-inducing hysteria of paparazzi flashbulbs. The tone of the track and video combine to re-contextualize Alice Deejay’s innocent question into harrowing social commentary, ominously challenging to the concept of celebrity. It’s the perfect soundtrack for a satanic cult’s ironic ’90s party. Check out the video below (if you can handle it).

Check out more from Salem on their predictably creepy website.