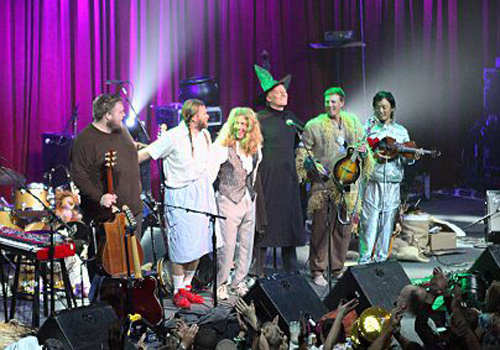 On Friday night, Sonoma, CA bluegrass band Poor Man’s Whiskey promised a very special night to celebrate the unique date. Headlining the historic Fillmore Auditorium, the band sold the show out and as a thank you the band came outside and serenaded the line of guests waiting to get in.

Featuring Michael Kang of String Cheese Incident sitting in on violin, the band performed their bluegrass interpretation of the classic Pink Floyd album, Dark Side of the Moon. Similar to the Flaming Lips show we reported on this summer, the band integrated elements of The Wizard of Oz to continue furthering the urban legend of the ‘Dark Side of the Rainbow.’ Check out how fun and upbeat Floyd can be below.

Get more information on Poor Man’s Whiskey on their website.