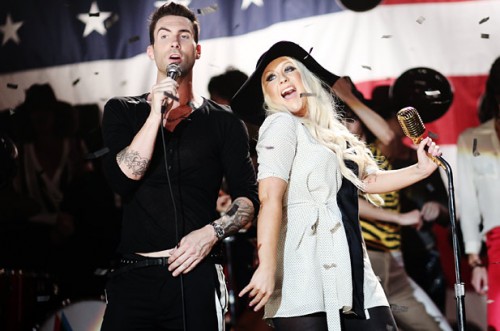 With its infectious whistling hook and taut digital disco groove, Maroon 5 and Christina Aguilera’s “Moves Like Jagger” is endearing a whole new generation of music listeners to the frontman of The Rolling Stones in a way Ruby Tuesday never could have expected. To those hip to the ways of classic rock, Jagger stands for a cragginess, for experience, for a libido-driven dude who’s seen a whole lot of life. But in this funky tag-team single, he’s all slickness and sultry dance beats — the key to Adam Levine’s soaring vocal seduction of a swiftly yielding Xtina, and the fuel for a very different demographic of backseat makeouts.

The following five cover efforts take that sexy, skippy tune and give it a truly Jagger-worthy reinterpretation.

1. Stephen Carmichael
Stephen Carmichael, known for his dancey re-interpretations of Top 40 tunes, delivers a moody and dark take on the song. It’s “Moves Like Jagger” à la emo, a la Robert Smith for the 21st century, à la New Order for the new MTV. The Australian artist’s yearning vocals and reverby mix result in a tune as sexy as the original — but in a smokey, tormented, ‘tonight is the last night on earth’ kind of way.

2. Roomie feat. Magdelena Engstrom
If Carmichael took “Jagger” into the 80’s, Roomie dials it back another decade and floats the needle directly over 1972, when Stevie Wonder recorded “Superstition.” This version from the Swedish group puts an excited, robotically bright, Stevie-esque bass line up front and supports it with a cushion of funky electric organ and brass hits. Just wonderful.

3. Little Big Town
Breaking it down and re-building with all organic materials, Little Big Town perform this amazing live version of “Jagger” with all the twang and flare of deep country. Bursting bluegrass banjo and robust harmonies propel this effortless acoustic version. But a heart-thumping acoustic bass and a whole lotta sick beats coming out of a tiny stripped down drum kit round out a really great take.

4. Peter Hollens feat Savannah Outen
If the groove of the original song makes you want to moonwalk into a slippery backbone slide, this bouncy a cappella version from Peter Hollens will inspire a more light-hearted booty shake. Hollens’ remarkable vocal recreations of the instruments weave together with a more fun-loving energy (the very presence of his confident “doo doo doo”s will do it…) to produce a peppy, smile-inducing version that stands on its own as a song, and not just as “one of those a cappella covers.”