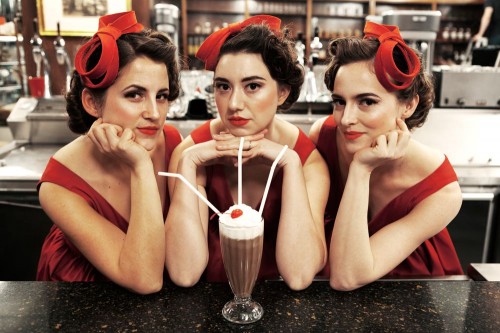 Judging from their press photos and bio (Facebook interests: lipstick, peppermint, Carnegie Hall), the Bandana Splits would seem to be taking the ‘50s-retro vibe mined by groups like Dum Dum Girls to its Happy Days extreme. That’s true to some extent, but the trio of Dawn Landes, Annie Nero, and Lauren Balthrop is up to more than rehashed nostalgia. Their debut album brims with pop smarts and cotton-candy harmonies that sound just as fresh in 2011 as they would have in 1961.

Take their new cover of “Everyday Is Like Sunday,” a tune it’s hard to imagine the Fonz cuing up on the jukebox. The trio recorded their harmony-rich version of Morrissey’s hit to celebrate reaching 1,000 Likes on Facebook. It sounds like the Andrews Sisters via Manchester and we’re pleased to premiere it below.