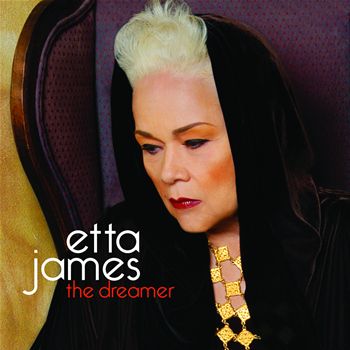 With her most recent release, The Dreamer, Etta James announced her retirement from the music business. Her family recently disclosed that the 73-year-old suffers from leukemia, along with a number of other physical complications, and revealed her diagnosis of Alzheimer’s in 2009. While her decision to end her career is no surprise, what does startle is the nature of the final album with which Etta chose to take her bow. A curious collection of covers in which a handful of true blue soul and R&B standards rock alongside the likes of Guns N’ Roses’ “Welcome to the Jungle.”

James’ take on the G&R hit tops The Dreamer’s press marquee. And who wouldn’t want to hear an interpretation of that chaotic metal classic by one of the R&B world’s most tortured souls? With that explosive potential, James’ execution is less of a bang, giving us hard rock gone prudish Proud Mary with a stilted squareish groove. And while it’s amusing to hear those lips that famously sighed forth “At Last” now utter “I wanna watch you bleed,” the uncanny bluesy gospel context and James’ humoured delivery leave the track feeling a bit off-brand. Unfortunately, some other cuts suffer from the same slightly disenchanting disconnect.

But the record provides enough musically lucid moments to make up for the blips along the way.  James’ performance on Little Big Town’s country tune, “Boondocks,” rises above musically ‘blah’ backings to testify about always remembering where you came from, as those deep purple-y, well-earned, life-coarsened vocal tones growl out with awesome force. And with bluesy classics like “Dreamer” (original by Bobby “Blue” Bland), “Misty Blue” (popularized by Dorothy Moore) and “Cigarettes and Coffee” (Otis Redding’s tune), the lady simply blows it up — or, rather, blows it down, as the heft of all James’ years of pain, romance and addiction drip down deep into their welcoming grooves.

Illness aside, the last few years have left some strange marks on the image of Etta. After emerging from several rounds of rehab for heroin and painkillers, James fought hard to adapt to a changed industry. The New Etta became the voice of a Diet Coke commercial, the focus of a major motion picture (Cadillac Records), an old salt insulting Beyonce’s performance of “At Last” at Obama’s inauguration and a guest artist on Dancing With The Stars.

True, The Dreamer‘s approach is a bit on the staid plan. James doesn’t give us a mind-blowing, Johnny Cash-does-Nine Inch Nails, kind of career send-off. But she does place the bookend on her own career, surrounded by family (sons Donto and Sametto are in her band), the warmth of some classic tunes, and, yes, a cut from the catalogue of G&R. Gone is the sweet clarity of that girl who sang “Something’s Got A Hold On Me,” but the sassy Etta that’s seen it all remains. So polish the crystal and put on some headphones. Enjoy the nearly magical spell of The Dreamer with any one of the beverages the album’s tracks celebrate and toast the conclusion of Etta James’ amazing career.