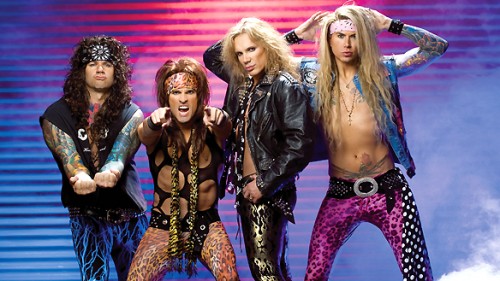 Even though the site you’re currently reading focuses solely on cover music, we seldom turn our attention to actual cover acts. Today, though, we’re going to spotlight one that’s risen to a level of notoriety much higher than most of their bar-dwelling brethren — Steel Panther, the most rockin’ band in the land. This four-piece group, comprised of lead vocalist Michael Starr, guitarist Satchel, bassist Lexxi Foxxx and drummer Stix Zadinia (get it?!) expertly merge tremendous musical chops and keen comic sensibilities to both pay tribute to ’80s hair metal icons and lay bare all the ridiculousness inherent to the genre. Through a regular Monday residency on LA’s Sunset Strip, Panther (formerly Metal Skool, Metal Shop and Danger Kitty) has built an impressive following out of their celebratory shows. In fact, the group’s been embraced by LA’s indie comedy community just as much as the world of rock music; in a hilarious episode of the Comedy Bang Bang podcast, they joke with Human Giant and Children’s Hospital star Rob Huebel that he’s the fifth member of their band, and Sarah Silverman has appeared in their music video for “Death to All but Metal.”

Over the past few years, Panther’s transitioned to writing original material for wide release; as it happens, their second record, Balls Out, drops on October 31. But Panther’s prowess began with covers, and so it remains; even now the band’s sure to throw some mega-hits of the ’80s in with all their original material at shows. They’ve officially recorded a fair number of covers as well, including a couple impressive reworkings of ubiquitous songs you wouldn’t expect to hear from a glam band. So as we celebrate the release of Balls Out this week, let’s all take a moment to feel the Steel.

Video: Nothin’ But a Good Time (Poison cover) – featuring Corey Taylor of Slipknot
Panther’s residency on the Sunset Strip has allowed them to build quite a following not just among fans but also with notable industry figures and celebrities. That means you never know who’s going to jump onstage at one of their shows; past guests have included Kelly Clarkson, Paul Stanley and Dallas Cowboys quarterback Tony Romo. At a 2008 performance at the Key Club, Slipknot/Stone Sour growler Corey Taylor joined the band for a high-energy rendition of Poison’s “Nothin’ But a Good Time.” What most impresses here is Taylor’s commitment to the tune; surprisingly, he ends up sounding quite a bit like original lead vocalist Bret Michaels. It seems hair metal can get even the most serious of musicians to have fun.

Video: Don’t Stop Believin’ (Journey cover) – featuring Sebastian Bach and Cee Lo Green
Maybe the most star-studded of all Steel Panther live collaborations came earlier this year at a Jani Lane tribute show when the group called Skid Row’s Sebastian Bach and hitmaker Cee Lo Green to join them for Journey’s anthemic singalong. Again, you’ve got to appreciate the gusto of these guest performers; it’s impressive that Bach and Green seem to know most of the words to a song pretty far removed from their own work. I love how Cee Lo quickly loses interest during this song’s second verse when he notices all the girls behind him on stage. I guess Family Guy was right; Journey does have a way of bringing people together.

Panther was asked to turn in a rendition of this 1981 power metal tune for the MTV show Rob Dyrdek’s Fantasy Factory. What results is a song that the band totally makes their own — not only do they bring a new intensity to the original (removing the spacey keyboards helps quite a bit) but they seem to embody the lyrics perfectly. For instance, casual references to white powder make the song seem to fit right ino Steel Panther’s wheelhouse.

Video: Crossfire (television commercial)
L.A. videomakers FreddieW got it in their head to remake what they call “the greatest board game/commercial combo of all time,” and Steel Panther was generous enough to add their chops to the proceedings. What we have here isn’t just a cover of a song, it’s a cover of an entire commercial, viewed through the modern lens of almost-but-not-quite ironic distance. Could Panther inspire Milton Bradley to resume production of this classic game? Only time will tell!

Steel Panther- I Want It That Way (Backstreet Boys cover)

If you were to ask me what my favorite cover of all time is, I would point you to this song with a completely straight face. I could talk about how it cleverly recasts one populist music genre (toothless boy-band pop) for another (hair metal) and what that says about trends in music over time. I could point to the song’s minor-key restructuring as a suggestion of something more sinister behind the Backstreet Boys’ choir-boy veneer. But forget about all that. This song rocks. Steel Panther turns an ultimate guilty pleasure into a song you don’t have to feel bad about listening to. In fact, I declare it your duty as a human being to drive around your town blasting this song from your car stereo speakers. Go ahead, do it now. It’s your one desire.

Check out more stuff from Steel Panther on their website, and don’t forget to pick up Balls Out!

3 Responses to “In the Spotlight: Steel Panther”