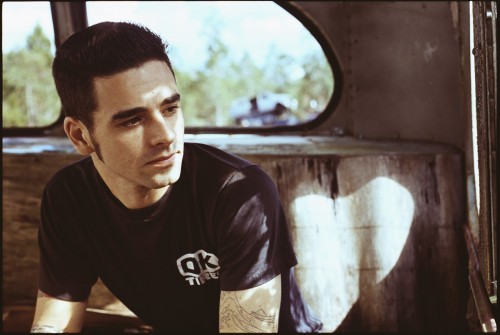 As the frontman for alt-rock heroes Dashboard Confessional, Chris Carrabba has been capturing ladies’ hearts with his angsty, swoon-worthy voice since 2000. Now it seems that the Connecticut-born singer is ready for something new. This winter he’s embarking on an acoustic tour, but this time around he’ll be flying solo – just a man and his trusty guitar. And Covered in the Flood, Carrabba’s first solo album featuring nothing but covers, will be available at his shows. He generously gave the public a little taste of what’s coming by sharing five of the ten tracks.

Although the voice in each of the songs is unmistakably Carrabba’s, his style is a little more mature than what many younger Dashboard fans might expect. The covers are slow-moving, mild, and rather folky – not surprising, since many of the songs have Southern roots. Carrabba’s renditions of Big Star’s “I’m In Love with a Girl,” Guy Clark’s “The Cape,” Justin Townes Earle’s “Mama’s Eyes,” and The Replacements’ “Skyway” were all released together last week. SPIN posted the last of the five early releases, a cover of R.E.M.’s “It’s the End of the World as We Know It,” just yesterday. Download each below; you’re in for a pleasant surprise.

Check out more from Chris Carrabba on Dashboard Confessional’s website.