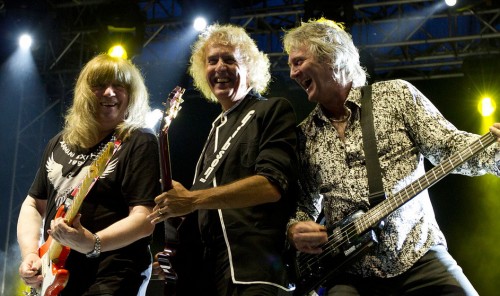 Throughout the ‘70s, the Sweet racked up glam-rockin’ hits like “Ballroom Blitz” and “Love Is Like Oxygen.” In the decades since, like many of their peers, they’ve sputtered. The band has broken up and reformed a few times, but nothing much came of it. In 1997 the frontman died and the drummer followed him five years later. It didn’t seem likely the band would return, but now they’re back with their first recording in years, a cover of the Who’s “Join Together.”

Andy Scott’s guitar drives the cover – which seems only appropriate, since he’s the only remaining original member. The band’s golden days may be decades behind them, but they sound as full of life as ever. Listen to “Join Together” below.

The Sweet – Join Together (The Who cover)

Check out more from the Sweet at their website.