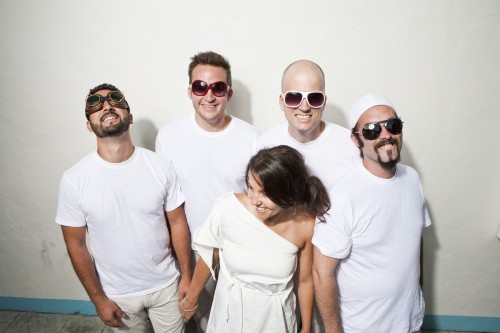 • North Carolina collective Stephaniesid describe their sound as “pop-noir,” which is a phrase that could also be used to describe the Dream Academy (“folk-pop-noir” perhaps). Their cover of “Life in a Northern Town” brings a joyful bounce to the proceedings, adding in xylophones, horns, and whimsy aplenty.
MP3: Stephaniesid – Life in a Northern Town (The Dream Academy cover)

• London pop songwriter/producer Paul Dixon records as David’s Lyre. He released new single “Higher Ground” and, to celebrate, covered Rihanna’s new single. He bills it as a cover/remix, so we’re assuming some of the background instrumentation is lifted from the original. Either that or he’s really good at manipulating her vocals.
MP3: David’s Lyre – We Found Love (Rihanna cover)

• Seattle record label Whprwhil Records has put together a tribute album celebrating Beck’s One Foot in the Grave. It features local artists covering every track on the 1994 record, reclaiming it from its somewhat unfortunate positioning as “the one between Mellow Gold and Odelay.”
MP3: World History – Forcefield (Beck cover)