YouTube is filled with amateur cover “artists.” Most stink. On The ‘Tube extracts  the exceptions. 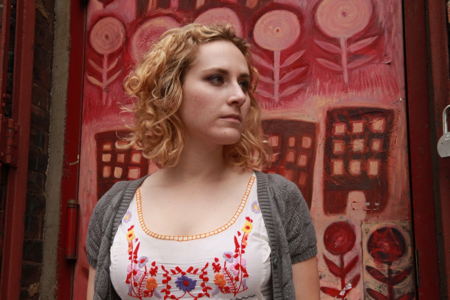 Milwaukee’s Margaret Stutt was well known in Brewtown’s art circles. Deftly dragging her accordion behind her like a frequent flyer through airport security, Stutt seemed to pop up at every artistic benefit in the city. Margaret, better known as Pezzettino, was also just as likely to spontaneously appear around town, shooting a video using some iconic Milwaukee location as a backdrop. Now relocated to Brooklyn, Pezzettino has three albums of original material including last year’s Lub Dub, a collaboration with producer/engineer LMNtlyst.

Cover Me fans may already be familiar with her via her contribution to the Wilco tribute disc Wisco. Many of Pezzettino’s covers on her YouTube channel were requests and she takes on just about every genre imaginable.  Most online covers feature very amateur video – usually one still video camera trained on the performer.  With Pezzettino you get a bonus – video that is every bit as quirky and compelling as her cover versions.

Like a digital movie reduced to a series of zeros and ones, “Freebird” is radically deconstructed into an ultra lo-fi experience complete with an unexpected choreography bonus. Much the same with “Goodbye Stranger” which gets another lush, lo-fi treatment.  Pezzettino begins at the end of the Supertramp standard, apparently choosing to emphasize the verse relating to individuality and changing the meaning of the song.

Pezzettino teams with LMNtlyst to cover Fleetwood Mac’s “Landslide.” The original embraces you with Stevie Nicks’ soft vocals and Pezzettino’s cover is every bit as warm and comfortable, though more alluring, in an Elizabeth Fraser/Cocteau Twins fashion. In a similar mode, she introduces a xylophone in an exotic cover of Sea Wolf’s “Wicked Blood.” The xylophone gives way to a simple drum machine track and minimal piano while Pezzettino’s vocals seem to float in on the wind.  The result is a strong contrast to the anthemic feel of the original.

As if to prove there’s nothing she can’t cover, Pezzettino took on As I Lay Dying’s “Forever.” She scats and prances her way through one of the most unlikely covers imaginable, somehow extracting a finger-snapping dance number from the metal original. The video is filmed in an iconic Milwaukee deli and is delightfully silly. Margaret says a lot with her music and can say just as much with a smile and a roll of her eyes.

Drop by Pezzettino’s website here and see more covers and some Pezzettino originals as well on her YouTube channel.

One Response to “On The ‘Tube: Pezzettino”