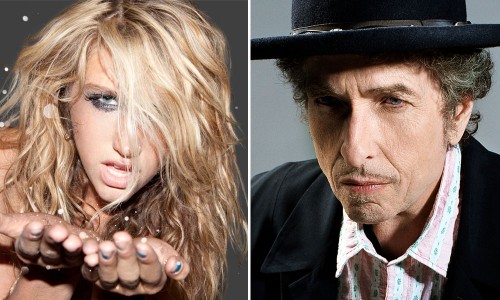 Remember that Amnesty International Dylan tribute album we told you about a few months back? Well we now have have more information on it. It’s called Chimes of Freedom: Songs of Bob Dylan Honoring 50 Years of Amnesty International. In addition to Bad Religion and Rise Against, it also features covers by My Morning Jacket, Sting, Patti Smith, Dave Matthews Band, Adele, Lucinda Williams, Jack’s Mannequin, and…Ke$ha.

Yes, the trashy pop star will cover “Don’t Think Twice, It’s Alright,” and offered this choice quote to Rolling Stone: “When you think of me, you wouldn’t think of Bob Dylan. My music is more about the going crazy than politics. But he’s a huge influence – he writes his own music and means what he says. I write my own music and I fucking mean every word I sing.”

As of that doesn’t sound good enough, she noted that she broke down during recording and “You can hear the snot running down my face.” In less ridiculous news, My Morning Jacket will tackle “You’re a Big Girl Now,” Adele will reprise “Make You Feel My Love,” and Patti Smith will do “Drifter’s Escape.” “I wanted to do something I’d never attempted,” Smith said. “We had just completed our new album, and instead of drinking champagne we decided to cut the song.”

No official tracklist, but a list of confirmed artists/songs is below.