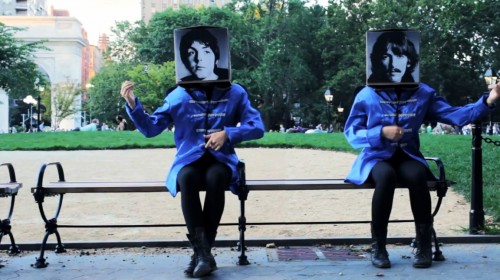 Back in June, we heard Brazilian septet Baleia cover Justin Timberlake’s “What Goes Around.” We mentioned that it marked the first in a new series called Cover Flow that our inability to speak Portuguese prevented us from knowing more about. Well, thanks to some intrepid commenters, we now know Cover Flow is a regular covers-themed party in Rio de Janeiro. Though sadly we can’t make it down to Brazil to attend the festivities, we can all enjoy the covers they film to promote it.

The second cover comes from quintet Mauricio Lago, performing the Beatles’ “Eleanor Rigby.” While Baleia gave us a basic performance video, Mauricio Lago get more ambitious. They don Beatles head boxes on the streets of NYC, earning bewildered stares and, just as often, seen-it-all ambivalence (this is New York after all). The clip is charming and worth repeated viewings. And if it gets you to Cover Flow’s next covers party, all the better. Watch Mauricio Lago’s “Eleanor Rigby” video below.