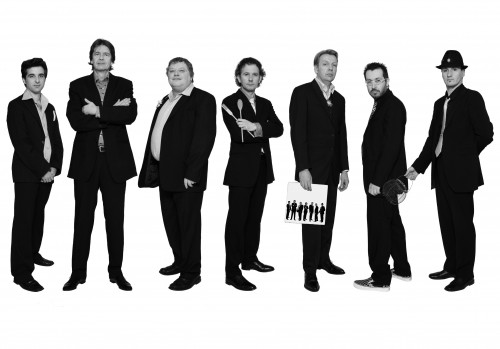 A subset of cover artists specialize in taking the songs of the day and turning them into the songs of “back in the day.” Early practitioners included The Templeton Twins and Big Daddy; we’ve offered you the ’40s close-harmony stylings of The Puppini Sisters, the Djangoesque djazz of The Lost Fingers, and rockabilly heroes The Baseballs. Now we add Pink Turtle to that list, a Paris septet out to prove that it still don’t mean a thing if it ain’t got that swing.

Pink Turtle describe themselves as “jazz musicians with a sense of humor.” While that’s evident, their humor does not extend into mocking; they restructure the songs for their purposes, keeping their strong foundations, but never forgetting that these songs were meant to entertain from beginning to end. You may have an initial laugh of recognition, but after those opening 15 seconds there’s still a lot of song left to address, and the joke wouldn’t hold if the band just repeated one punchline ad infinitum. Fortunately, Pink Turtle aren’t lounge lizards out for that cheap laugh. By not taking a casual approach, they come up with something more lasting and, in its own way, more profound. This band knows the value of the tuxedo and the worthlessness of the tuxedo tee shirt. And the fact remains – they are funny. Hear for yourself…

Pink Turtle – Walk on the Wild Side (Lou Reed cover)

They may lose the memorable bass line from Reed’s original, but they add cornets, clarinets and ukeleles – fair trade? We report, you decide. As with most of these covers, the lyrics take a back seat to the arrangement, but you know the lyrics so well by now that it’s easy to let them move to the back seat and leave the driving to the music.

Hedonism has many faces. What looked one way in the shimmering lights of ’70s Hollywood looked another way altogether to flappers in the water fountains of ’20s Hollywood. But the feelings coursing beneath these looks are equally shady; if this version doesn’t prove it, nothing can.

Pink Turtle – How Deep Is Your Love (The Bee Gees cover)

Any moment tied to Saturday Night Fever is trapped like a fly in amber; it takes some unique instruments to set them free. Barry, Robin and Maurice preserved a little Louis Prima deep inside this song – it took Pink Turtle to uncover him, and a fine job they did too, by jingo. Ironically, the cover sounds less stuck in its time than the original, despite also sounding a quarter century older.

We know it sounds absurd, but that megaphoned-in vocal brings across the distance the singer feels from the world that’s overfilled him and pulled him away from the innocence of youth. And the children’s choir brings that point home with a bang. (You’d think they would have kept the castanets, though…)

Yes broke out of the prog-rock arena with this song, little knowing it would one day wind up under Pink Turtle’s care in Havana. If you were watching a movie set in the ’50s, and this was playing in the background of a nightclub scene, you’d most likely not even notice the song’s nonvintage pedigree. It’s a great compliment to the musicianship of the band that they would blend into the background; at the same time, attention truly must be paid to what they’ve done here.