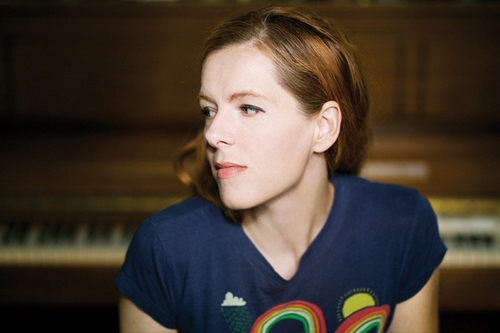 Active in various music scenes since 1994, Neko Case has built herself an impressively deep resume. That’s based primarily on her position as super-pop group The New Pornographers’ co-lead singer, as well as her solo alt-country/folk career. Meanwhile, her non-musical projects command almost as much attention, whether it’s her considerable charity work for organizations like 826 National or her guest spots on Adult Swim shows like Aqua Teen Hunger Force or the truly bizarre Cheyenne Cinnamon and the Fantabulous Unicorn of Sugar Town Candy Fudge.

With everything she touches, folks are forced to pay attention to her mighty voice and commanding presence, and more take notice all the time: Case’s last record, 2009’s Middle Cyclone, hit #3 on U.S. music charts, an impressive feat for any artist. She recently toured as the support act for My Morning Jacket, which saw her teaming up with that quintet for a couple surprise covers we’ve written up. Yet believe it or not, there are almost no professionally recorded tributes to Neko out there. So to commemorate her birthday (she turns 41 today), we scoured YouTube looking for the best fan homages on the Web — and there are many. Here are some that particularly stood out amongst their peers.

In many ways, Timber introduced Case to the world; it was the first track on her first solo record (though that disc, The Virginian, is co-credited to “Her Boyfriends”). YouTube user yennyzennyjenny (also known as Jenny) delivers a colorful ukulele-fueled cover to help us kick Case’s birthday celebrations off right. It’s no easy task to match Case’s voice, but Jenny performs admirably, bringing a welcoming, affable touch to this surprisingly good-natured song about heartbreak.

Columbia, MO singer/songwriter Molly Trull delivered a live performance of one of Case’s signature songs during a 2009 show. Trull’s a great singer, but what really pushes this performance over the top is her friend Matheus’ excellent electric violin accompaniment, which adds some real depth to the cover.

San Francisco rockers Top Critters were joined by their friend Jillian Iva at a 2008 show to transform Case’s haunting track into a bar-band rocker. The best part of this cover is its deliberateness; Top Critters’ rhythm section drags “Ghost Writing” along like some Pearl Jam-style dirge. It seems rare for full bands to take on Case’s songs, but these guys have got it down cold.

The one widely released Case cover comes from English rock singer Marianne Faithfull’s 2008 covers album Easy Come, Easy Go. Marianne’s low range doesn’t quite afford the same versatility as Case’s voice, so the octave-jumping in this cover comes off as a little strange. Still, the ending guitar work from Sean Lennon totally rocks, bringing out a raucous element not really present in the original song.

Allison Sattinger – I Wish I Was the Moon (Neko Case cover)

If there was any justice in this world, this cover would receive wide release as well. California singer/songwriter Allison Sattinger sits down at the piano to deliver a rendition of Case’s most oft-covered tune, one of the final tracks of 2002’s Blacklisted. The honesty and musicianship Sattinger displays is breathtaking and totally compelling; her style will draw you in, making it really tough to stop listening to this once you start. In the wild world of YouTube covers, Allison’s “I Wish I Was the Moon” stands in rarefied company.

One Response to “They Say It’s Your Birthday: Neko Case”