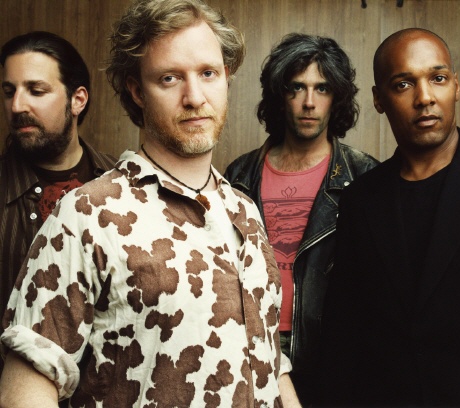 As tapes from the era can attest to, in 1991 you couldn’t turn on the radio without hearing the Spin Doctors’ two mega hits, “Two Princes,” and “Little Miss Can’t Be Wrong.” Shockingly, these guys are still making music together, and have been, off and on, since those early days. In support of the 20th anniversary of their debut album, Pocket Full of Kryptonite, they dropped by Rolling Stone to perform those two hits as well as a cover of Robert Johnson‘s “Stop Breaking Down.”

The intro to the song by lead singer Chris Barron, where he talks about playing in blues clubs, is worth listening to. The Spin Doctors don’t strike most folks as a blues group, but more as a pop or alt-rock group, so hearing that little bit of the band’s history helps explain why they do such a convincing version of the Johnson classic (also famously covered by the Rolling Stones). Guitarist Eric Schenkman lights the room up with a blistering solo, and the rest of the group supports with a very easy comfortableness that comes with playing together for over 20 years. Aside from the guitar solo, none of the performances are outstanding, but the sum of the parts is greater than the whole as the overall product is a pretty great sounding blues number. Check out the video below.

Check out more from the Spin Doctors at their website