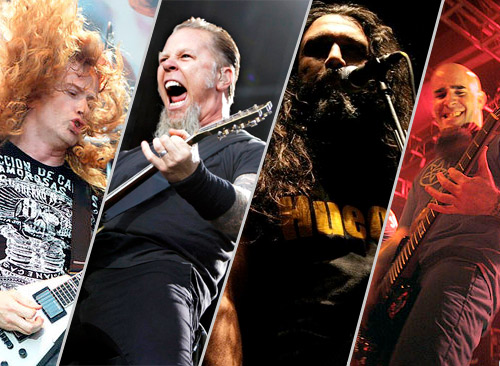 Last night the “Big Four” of thrash metal – Metallica, Slayer, Megadeath, and Anthrax – played their second U.S. show at Yankee Stadium. Despite bad blood in the past, the vibe onstage was all bro-hugs and congratulations all around on having made it this far. The four bands even united during Metallica’s first encore song to pay tribute to a mutual influence: Motörhead. James Heftield called Lemmy the Godfather of Metal (“whether he likes it or not”) before rocking through the band’s legendary “Overkill.”

Metallica first covered the song in the Load sessions, releasing it on the “Hero of the Day” single. It was loud then, but with a dozen-plus hard rockers helping them out, it’s even louder now. Check out a fan video of the performance below. It’ll blow out your speakers (and kinda sounds like crap), but isn’t that the whole point?

Check out more Metallica at their website. Image via MetalSucks.

One Response to “Metallica, Slayer, Megadeath, and Anthrax Cover Motörhead at Yankee Stadium”