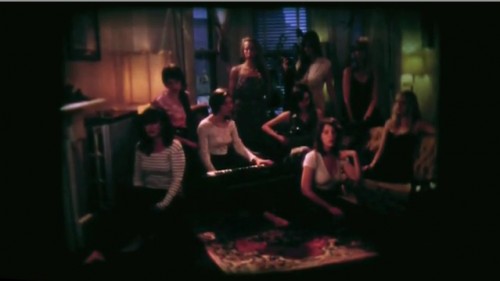 These days, it seems like everybody loves to cover Ace of Base. It’s hard to say just what it is about those quintessentially early-’90s alt-pop Swedes that’s so delightfully coverable, but clearly something is. Maybe it’s nostalgia; maybe it’s the fact that their songs are just so damn catchy while remaining a little bit cynical; maybe it’s even Lady Gaga’s fault for shamelessly using their beats and bringing them straight back into the cultural subconscious.

Regardless, it’s always a delight to come across a new Ace of Base cover and this is no exception. Brooklyn’s cover-supergroup Girl Crisis – comprised of members of Chairlift, Class Actress, Au Revoir Simone, and other such indie acts – has brought us a cover of “The Sign” that is both familiar and refreshingly new.

It’s familiar for a few reasons. For starters, it’s highly reminiscent of the choral cover at the end of Slackers, with Devon Sawa running through campus having some revelation or other and ultimately revealing, “I saw the sign. And it opened up my eyes.” It goes beyond that, though, distinguishing itself in its directness. Where the movie track takes liberties, every component of this track addresses the classic original faithfully, whether with vocals or maracas or some light percussion. Watch it below.