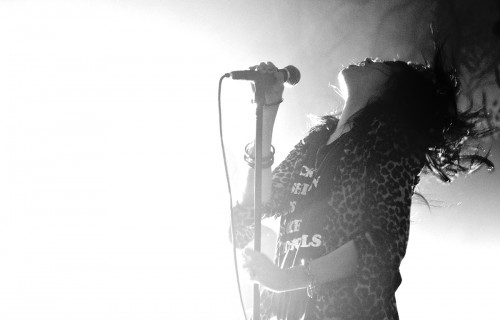 In the past few months, True Blood has established itself as the television show most likely to deliver unexpected covers. Last night’s Sons of Anarchy season premiere indicates there might be another gritty drama making a run for it. Almost five million caught the show (setting an FX record) and heard a sensitive new performance of Louis Armstrong’s “What a Wonderful World” from Alison Mosshart (the Kills, the Dead Weather).

We can’t locate a video to tell us what scene the song soundtracked (did anyone watch the show?), but we’ve got the audio for you to stream below. The choice of “What a Wonderful World” comes with more baggage than you might imagine. The song was written in 1967 by Bob Thiele and George David Weiss. Thiele’s son, Bob Jr., is the music supervisor on Sons of Anarchy. The song’s choice wasn’t some sort of reverse nepotism though.

“I didn’t choose it!” he told the Huffington Post. “Kurt [Sutter, creator] wrote it into the script knowing full well that it would be a big challenge for me. I thought, ‘Great, just what the world needs, another cover of the Louis Armstrong classic.’ So I decided to find as strong a musical contrast to the version we all know without losing the intimacy of the original.”

Listen to Mosshart’s version below and see if it fits the bill. She performs it with the Forest Rangers (which includes Bob Jr), who perform most of the show’s music. If you like it, buy it on iTunes, and keep your fingers crossed for more covers from the show.

Buy “What a Wonderful World” on iTunes.