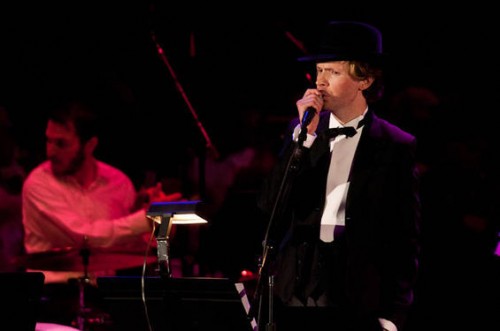 Last night at the Hollywood Bowl, an assortment of indie and alternative stars and upstarts paid tribute to Serge Gainsbourg. Beck and his band curated the event, which found artists like Ed Droste (Grizzly Bear), Victoria Legrand (Beach House), Mike Patton (Faith No More), Sean Lennon and Charlotte Kemp Muhl (The Ghost Of A Saber Tooth Tiger), and Zola Jesus playing an assortment of Gainsbourg tunes before an orchestra performed the entirety of Gainsbourg’s 1971 magnum opus Histoire De Melody Nelson.

Some videos of the event have begun trickling out and you can watch ‘em below. The selling point is Beck’s performance of a trio of covers including “Teenie Weenie Boppie” and “Les Sucettes” (anyone know what the first song is?). Updated. Then we have better videos of The Ghost Of A Saber Tooth Tiger performing three Gainsbourg tunes and Joseph Gordon-Levitt (who has decided he’s a musician) reciting in French. Watch ’em all below.
Update: Better Beck videos substituted; Zola Jesus video added.

The Ghost Of A Saber Tooth Tiger – ?? (Serge Gainsbourg cover)