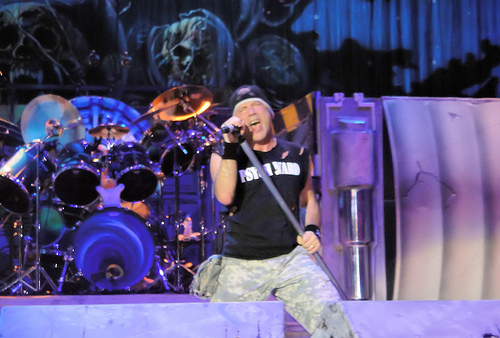 Bruce Dickinson may be the most metal individual of all time. Not only does he front Iron Maiden, one of the pioneering groups of the New Wave of British Heavy Metal and a genre-defining titan of rock, but he’s also a licensed commercial airline pilot. That means that he can charter a Boeing 757 to fly fans of his band to gigs they might not otherwise reach, something he’s actually done before. He’s even got a special plane named after his band’s mascot, “Ed Force One.”

Today, Dickinson turns 53 years old. It’s hard to believe that someone that age is still out there rocking such intense music, but Iron Maiden’s shown no signs of slowing down. In 2010 they released The Final Frontier, their highly praised 15th studio album but not, according to the band, their last. In the past few years they’ve embarked on tours in which they’ve only played material from their first four albums, bucking any criticism that they’ve grown softer with age. Bruce Dickinson’s Iron Maiden is certainly a band worth celebrating, and today we’re going to do just that with these five covers of Maiden classics.

Every time the post-punk/prog boys in Coheed and Cambria cover a song, it ends up feeling like something special. Since all of their songs tell some kind of crazy science-fiction story, the covers must fit into the story somehow, right? Whether or not that’s the case, this band clearly owes something of a debt to the heavy-shredding Maiden, and “The Trooper’s” been a staple of Coheed and Cambria setlists since almost the beginning. An official recording of the cover finally saw release on Kerrang! magazine’s 2008 Maiden Heaven tribute. Claudio Sanchez and company don’t do a whole lot to change the song here beyond adding some atmospheric keyboards, but they deliver a solid, loving performance in keeping with the Coheed style.

U.S. power pop group Damone takes an unexpected twist with this unplugged Maiden cover, turning the song with possibly the most Platonically metal opening riff of all time into a beautiful and emotional ballad with lush orchestral backing — of course, the totally awesome metal riff still appears in the song’s solo and outro sections. This song comes off the group’s 2006 LP Out Here All Night.

One of the hair world’s strongest voices takes on this metal classic and unsurprisingly has no difficulty knocking it out of the park. Sebastian can screech with the best of ’em. Check out the production on this track, which sounds like it would’ve fit right in on Skid Row’s (excellent) second release, Slave to the Grind.

Van Canto‘s a German metal band that uses almost no instruments; other than real drums, they’re a cappella to the core. Although some of the arrangements might be a little overdone, the cover comes off as significantly novel and fairly impressive. “Fear of the Dark” is one of Maiden’s most epic tunes; this couldn’t have been easy. I especially like that the group gives the melodic guitar solo to its lead female vocalist. If you’re wondering why certain parts of the song sound like there are actual guitars present, it’s because the group members sing through amplifiers to better imitate the original instrument sounds.

Zwan – The Number of the Beast (Iron Maiden cover)

Billy Corgan’s short-lived side project contributed this alt-country-styled tribute to Maiden for the 2002 movie Spun. Considering that the film’s about drug abuse, the haunting tone of this rendition seems especially poignant.

For more Maiden covers, be sure to check out our ‘The Number of the Beast’ full album feature. Keep up with Dickinson and Iron Maiden at the band’s official website.

2 Responses to “They Say It’s Your Birthday: Bruce Dickinson”