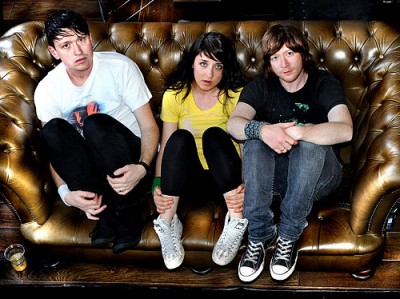 Manchester trio The Whip took a long break between the 2008 release of their debut album, X Marks Destination, and follow-up record Wired Together, which drops on September 19. But that doesn’t mean they haven’t kept busy. Last year they recorded a series of covers for JD Set, including a take on Buzzcocks’ “You Say You Don’t Love Me” that found them collaborating with The Charlatans’ Tim Burgess and Mike Joyce of The Smiths.

Though they’re known for electro-heavy remixes, The Whip take a fairly straightforward indie rock approach to their cover of the 1979 Buzzcocks single. Burgess, reading from a cheat sheet, takes on vocal duties while Joyce provides the drums. Aside from a few scattered synth lines there are few hints of The Whip’s dance tendencies, but the high-profile lineup does provide an energetic cover of the punk legends.

The Whip – You Say You Don’t Love Me (Buzzcocks cover)

Check out more from The Whip at their website or Myspace.