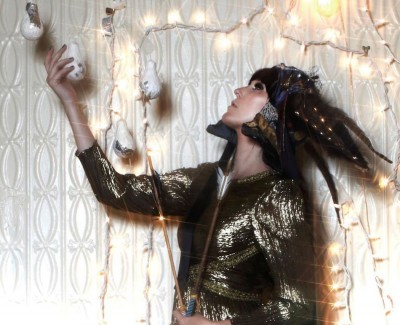 From concept to execution, “Cloudbusting” by Kate Bush is an epic song and video. Released on her number one 1985 album Hounds of Love, the video was one of the first mini-film type of music videos. A literal interpretation of the song’s content, the video was conceived by Terry Gilliam and features Canadian actor Donald Sutherland playing Bush’s father and was shown in cinemas before feature films in the UK.

When you are a contemporary female artist and you are already mentioned in reviews as sounding like Kate Bush, it’s risky to attempt to cover a Bush song. But Australian-born, Hungarian-bred, Brooklyn-based Johanna Cranitch is not afraid to take chances. In her roles as sound engineer and back-up vocalist, Cranitch is experienced for such a new artist. She recently released her debut album Northern Lights with her band the Dusty Floor and her piano version of “Cloudbusting” features a beautiful and wonderfully-paced video that creates a more intimate journey from the grand scale of Bush’s vision. Have a look below.

For more information on Johanna and the Dusty Floor visit their website.