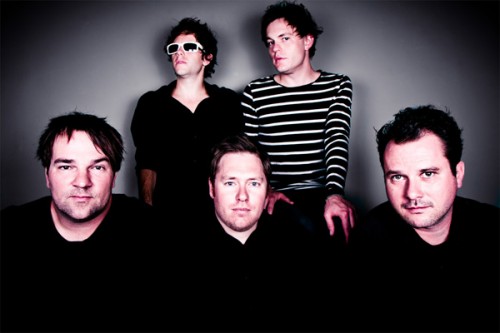 Regular readers here at Cover Me know that every Tuesday for the past few months, the folks over at the A.V. Club have squeezed an indie band into a very small room in their office to record a cover from a preselected list of tunes. Last week was particularly nuts, but this week the Get Up Kids go Undercover with their version of Blur’s “Girls and Boys.” For many on this side of the pond, this song marked the opening salvo in the Britpop invasion of the mid-’90s that brought us such bands as Oasis and The Verve. With its bouncing bassline and deliberately over-accented lead vocal, the tune charmed many.

The Get Up Kids recorded their first album in the midst of this second British invasion and admit in their pre-song interview to a long-standing love of Blur. Even without this confession, their admiration shines through in the tightness of their performance. They stick close to the original, even aping Damon Albarn’s accent, and remind of us of why this song connected with us all those years ago. Check out the video below.

Find more of The Get Up Kids on their website.