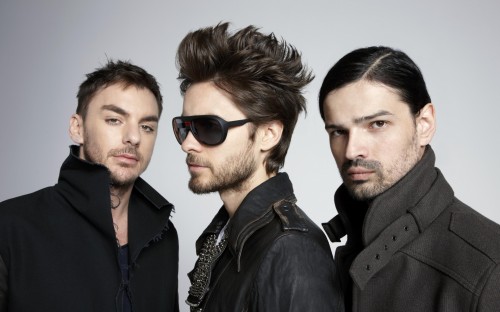 Three years ago, 30 Seconds to Mars stunned their many detractors with a slow, foreboding cover of Kanye West’s “Stronger.” It turned unlikely source material into something at odds with the boastful original. Their latest cover doesn’t reach the same transformative heights, but that’s because it takes on a much more easily-digested song: U2’s “Where the Streets Have No Name.”

Performed for MTV Unplugged, “Where the Streets Have No Name” displays the band’s oft-mocked lack of subtlety with a gospel choir, fawning audience, and Jared Leto’s heavy-handed emoting. All of which would be a bad thing, except that they’re covering U2, who aren’t exactly known for lightness of touch either. It’s an ably-performed tribute to an obvious inspiration and well worth watching.

Check out more 30 Seconds to Mars at their website or Myspace.