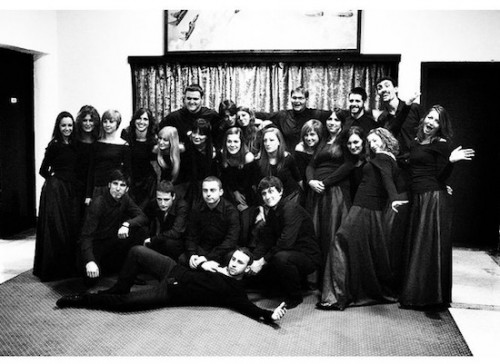 A capella and headbanging go together like toothpaste and orange juice. Or at least that was true before the Serbia-based Viva Vox Choir decided to take on a cover of “Du Hast.” The German industrialist band Rammstein broke into the mainstream with the song in 1997, propelled by its assaulting guitar riff, swirling noises and a beat that sounds like it is being hammered out on a trashcan. This isn’t where vocal groups typically tread.

The Viva Vox Choir, though, arranged their own version for a show back in May in Belgrade and just posted a video. The choir chose to tackle a fairly complex song, and one that doesn’t obviously lend itself to performance by vocals alone. The group, however, does a spot-on rendition of the siren noises in the beginning; the choir here easily outshines the one featured in the original. Using only their voices, the Viva Vox Choir has produced a work worthy of the Headbangers Ball.